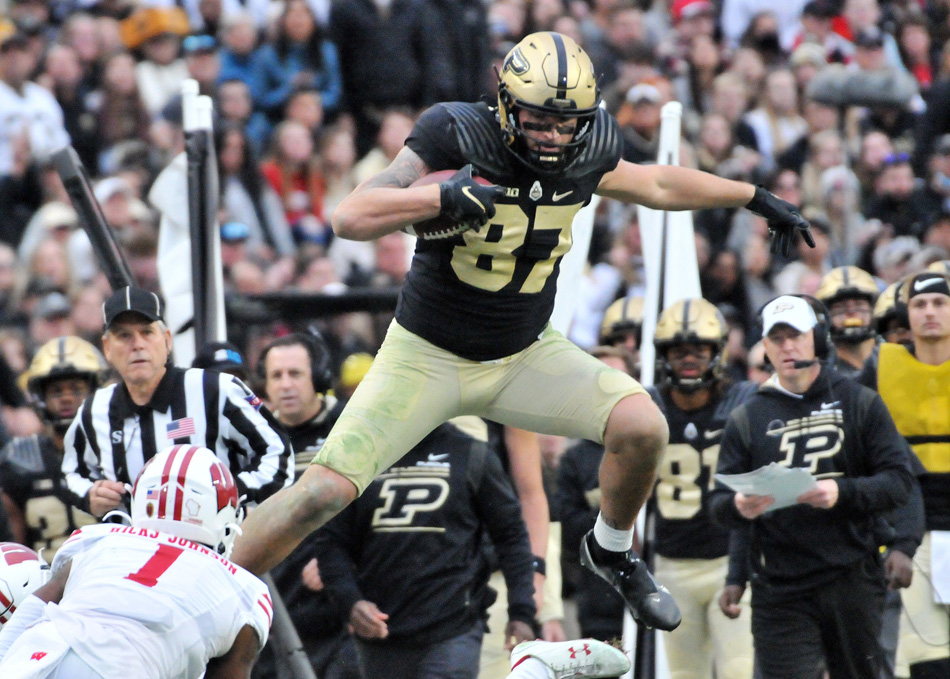 The Irish pulled away from the Trojans Saturday night at Notre Dame Stadium.

The Trojans used an interception and subsequent scoring drive to pull within eight points at 24-16, but Notre Dame then drove the length of the field, capped by a Jack Coan scoring run to put away the win for the No. 13 Irish.

Kyren Williams had a big game with 25 carries for 138 yards and two touchdowns and added another 42 yards receiving.

Drake London, one of the top receivers in the country, had 15 catches for 171 yards to pace the SC offense. The 15 catches ties the record for most ever against a Notre Dame defense.

A week after Purdue shocked college football with a big win at Iowa, the Boilers fell flat against visiting Wisconsin.

Wisconsin scored the game’s final 17 points after the teams played to a 13-13 draw in the first half. After registering 240 yards a week ago, Purdue’s David Bell was held to six catches for 33 yards. Payne Durham had nine catches for 112 and a touchdown for the Boilers.

Wisconsin held Purdue to minus-13 yards rushing and countered with 290 of its own, 289 of those from Chez Mellusi and Braelon Allen, who also combined for three touchdowns.

The Cyclones pinned down the No. 8 ranked Cowboys on its home field.

Brock Purdy threw for 307 yards, 125 of those to Xavier Hutchinson, and two touchdowns. Breece Hall added 70 yards rushing and a score for the hosts. Andrew Mevis hit a 29-yard field goal, a pair of extra points and had 189 yards punting, including a 50-yarder.

A nightmare schedule and subsequent results continue for the Hoosiers, which had no answer for the visiting Buckeyes Saturday night at Memorial Stadium.

CJ Stroud threw for 266 yards and four touchdowns and TreVeyon Henderson had 81 yards rushing and two touchdowns for the Buckeyes, checking in at No. 5 this week. The Hoosiers, which lost its fifth game against a ranked opponent, tied the game at seven when Peyton Hendershot caught a seven-yard touchdown pass from Jack Tuttle. Ohio State then responded with 37 straight points to end the half.

The RedHawks came back to win a MAC game in Muncie.

Ball State led 17-16 in the third after Drew Plitt found Jayshon Jackson for a four-yard touchdown pass. Miami would find the go-ahead score on a six-yard touchdown catch by Nate Muersch. Plitt threw for 227 yards and two scores, Jackson ending with eight catches for 121 yards.