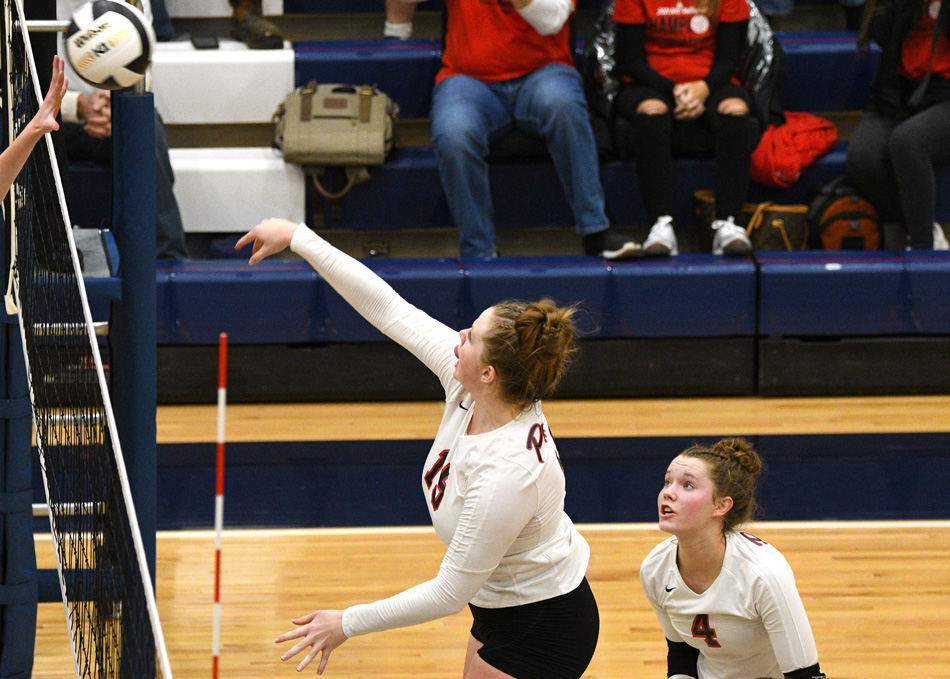 NorthWood seniors Alana Lehman (15) and Annika Bennett played their final games for NorthWood in a loss Saturday night to Bellmont at the Norwell Volleyball Regional. InkFreeNews photo by Dalton TInklenberg

OSSIAN – Bellmont apparently has the cheat code. Or maybe the Squaws are just really, really good.

Whatever angle NorthWood wants to take, the Panthers haven’t figured out how to beat Bellmont, for the third year in a row losing at the Norwell Regional. Saturday’s latest chapter had Bellmont put away NorthWood in a very snappy 25-13, 25-10, 25-6 championship push Saturday night.

Perhaps the best news for a NorthWood team that graduates just two seniors in Alana Lehman and Annika Bennett is Bellmont will move to Class 4-A next year after taking the regional title. But as for the present, 15 kills from Meg Saalfrank and seven apiece from four others was just too much to overcome as Bellmont erupted with huge runs in all three games to overwhelm NorthWood.

After losing its first game of the year to nationally-ranked Penn, NorthWood won 31 of its next 32 matches coming into the regional, then put away Northwestern in the morning contest at Norwell. But with just 27 points scored against the Squaws, it was a tough out for the Panthers, which close at 32-3.

Bellmont (29-5) will take on West Lafayette (28-2) in the semi-state next weekend, the winner facing either Brebeuf or Silver Creek in the Class 3-A championship.