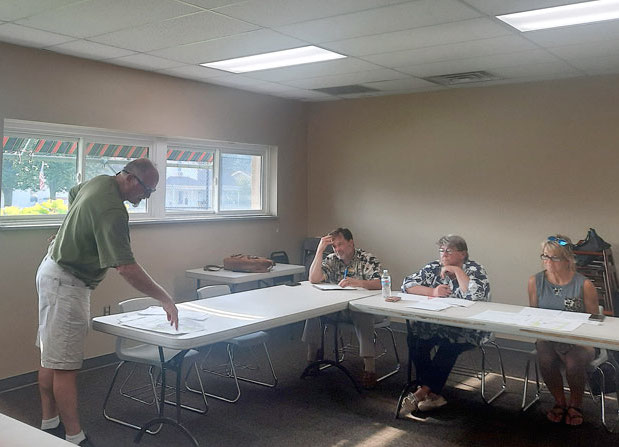 Permission was also given to Town Attorney Jack Birch to continue discussions with Knapp Lake Regional Sewer District about testing fees where the two systems connect. He will check with the town’s engineering firm of Triad. Lisa Strombeck presided.

Clerk-Treasurer Alice E. “Betsy” Luce presented a few dates for the budget workshop for the 2022 budget. Council members chose 4:30 p.m. Tuesday, July 27, in the town hall annex, next to the town hall-police station.

Alger reported one non-compliance issue for June with steps being taken by Inframark for training to prevent operator error from happening again. Councilman David Waliczek asked Alger how the new stripe painting machine was doing. She responded by saying it had been used on SR 13 and will be used on Washington Street soon.

Good feedback has been received by the department on repaving with more to come. Tree limb and brush pickup continued after the heavy rains. During July, Lift station A, 5 and 10 were repaired. Jon Kuhn was hired as a Maintenance I employee due to Gabe Baase becoming a Laboratory Tech II.

Police Chief Greg Church asked council permission to close West Washington Street on Saturday, July 31. North Webster-Tippecanoe Township Chamber of Commerce is holding the Dixie Day Festival then. If the chamber agrees, the first block of East Washington will also be closed according to a vote by council.

There were 275 calls of service during June for the police department. The highest number were traffic related followed by domestic fights-battery and citizen assists-lockouts. Officers worked 654.75 hours, drove 3,106 miles and used 293.28 gallons of fuel.

North Webster Park Board member Tammy Waliczek asked council to approve a new board member, Leina Dailey, which was done. Metal roofing has been completed on the restrooms and pavilion. The park board is looking into new door frames for the restrooms.

Kidd Construction’s John Kidd brought two plans to the town council for remodeling work for the home at 121 N. Mulberry St. While North Webster uses the county for zoning control, information is provided to the council for feedback from council to the county. Two variances will be needed for this remodel with nearby property owners being notified.

The major problem at the town park is geese waste. What worked last year, grape Kool-Aid being sprinkled does not work this year. Other methods are and have been tested. The goose distress call is on a timer but it hasn’t been successful. The board is looking into zig-zag snow fencing. It is currently being used at Warsaw’s Pike Lake Beach and could be another solution.

The next regular meeting of the town council will be 6 p.m. Tuesday, Aug. 17, in the North Webster Community Center, 301 N. Main St.