WARSAW — There are six public libraries in Kosciusko County. Warsaw, Pierceton, Mentone, Milford, North Webster and Syracuse each have one. But there aren’t just six libraries in the county. In fact, the number of libraries almost triples if Little Free Libraries are added to that list.

Though smaller in size, like libraries, Little Free Library stands focus on bringing together communities through a passion for reading. They promote a “take a book, return a book” exchange which provides 24/7 access to reading materials for people of all ages. As of now, there are 11 Little Free Libraries in Kosciusko County that are officially registered on the Little Free Library website. However, one Little Free Library, formerly located on School Street in Leesburg, is currently not operational. And that number doesn’t include libraries that aren’t registered through the site. 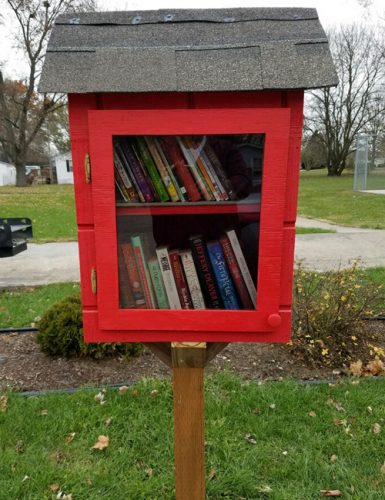 According to the Little Free Library website, there are more than 90,000 libraries established in more than 90 countries. The very first stand was built in 2009 and the organization recently celebrated its 10th anniversary in May.

“I really believe in a Little Free Library on every block and a book in every hand,” said Todd H. Bol, the founder of Little Free Libraries, who passed away in 2018. “I believe people can fix their neighborhoods, fix their communities, develop systems of sharing, learn from each other and see that they have a better place on this planet to live.”

Some stands are set up in parks or campgrounds, while others are inside or in close proximity to schools, including Wawasee Community Schools, Pierceton Elementary School and Leesburg Elementary School.

Hilary Stouder, a librarian for both Pierceton and South Whitley Elementary Schools; and Mary Helen Gensch, Title I reading interventionist for Pierceton Elementary School, recently discussed the establishment of a Little Free Library during a Whitko School Board meeting. The stand at PES, established in July, was made possible by Julie Underhill, a former third-grade teacher.

“Setting the stand up has all been donation-based,” said Stouder. “We both are so grateful to Julie for providing funding for it and our custodians for setting it up.”

Stouder and Gensch also have plans to continue establishing more Little Free Libraries in the Whitko community, including a second one in Pierceton, as well as one in Larwill, South Whitley and Sidney.

“The South Whitley Library has reached out to me and has shown interest in this,” said Stouder. “Kim Reiff with the Ole Hitching Post in Larwill has also shown interest in getting involved, too. So just having people interested in helping make more Little Free Libraries possible has been awesome.”

However, some Little Free Library stands are only accessible while school is in session. The stand at Leesburg Elementary School is inside the school’s library and is available during the school year. Even though it’s only a year old, it’s frequently used by students.

“The overall aspect is our students have free books at their disposal,” said Connie Watters, digital learning specialist at Leesburg Elementary. “It’s also a calming spot and has a friendship bench for which they can choose a book or just browse. It’s a win-win situation for all students and adults visiting the LFL.” 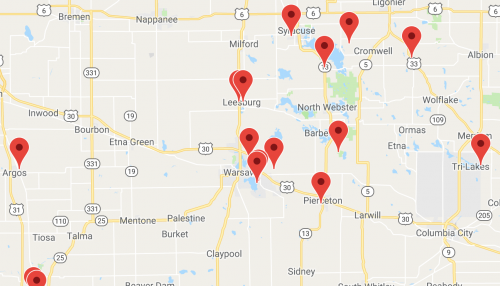 The red dots signify Little Free Libraries in Kosciusko County and surrounding areas that are registered on the littlefreelibrary.org website.

Syracuse Elementary School and Wawasee Middle School are also home to two Little Free Libraries, both of which were donated by the Syracuse Lions Club in 2017.

Some locals have even established their own LFLs in public areas. Susan Zuanella, who has had a lifelong love of reading, planned to set up her own Little Free Library when her daughter and son-in-law surprised her with one they built themselves. It is located near the ranger station at Yogi Bear’s Jellystone Park in Pierceton.

“This is the third full summer we’ve had the Little Free Library at the campground,” said Zuanella. “You know, sometimes when it’s a really hot day or it’s raining outside, there’s always that excuse of ‘there’s nothing to do.’ But that’s not true when there’s books waiting to be read.”

There are also two Little Free Libraries at Winona Lake Limitless Park. Lorraine Deffenbaugh purchased the first library in honor of her parents. A second library was built as a Boy Scout project.

“We have plans to add another library by spring to complete a village of Little Free Libraries at Winona Lake Limitless Park,” said Deffenbaugh.

Calvary Lutheran Church in Cromwell also established two Little Free Libraries, one of which is located in Kosciusko County at 9787 E. Excalibur Place.

“Our parishioners put them together,” said Debbie Griggs, Calvary Lutheran Church Council Treasurer. “We check on them every two to three weeks and make sure they’re always well-stocked. A lot of us had books laying around and we’re always trying to help others in the community, so we thought this was a great idea to look into.”

“It’s been around for a year,” said Noll. “I stop by about every two weeks to maintain it and put some new books in.”

Beth Anne Cox, a former children’s librarian and bookseller, had always wanted her own Little Free Library. Her husband surprised her and built one for her out of recycled materials in celebration of their wedding anniversary. The Little Free Library, located at 103 11th St., Winona Lake, is just south of the Winona Lake Free Methodist Church.

“The founder of Little Free Libraries, his goal had been to have around 1,700 Little Free Libraries in existence,” said Cox. “Now there’s just so many. During Halloween, we would tell trick-or-treaters to also stop by our library and get a book. And a lot of the kids would be more excited about taking home a book. People like to own the books they love.” 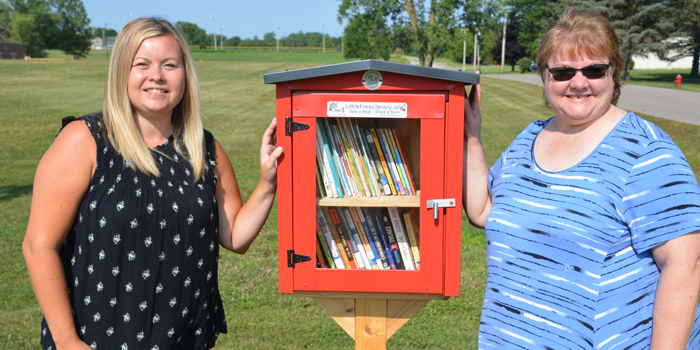