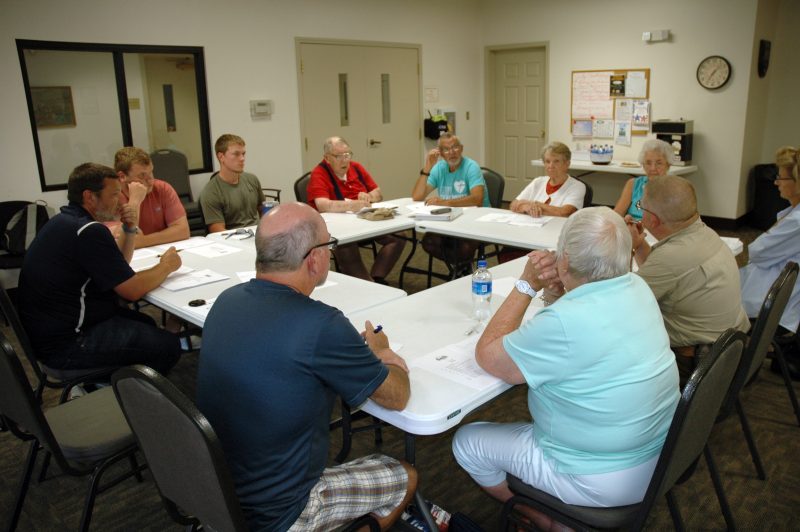 The Syracuse Parks and Recreation Board passed the department’s proposed 2020 budget at its Wednesday, July 10, meeting at Syracuse Community Center. (Photo by Ray Balogh)

The board made one amendment to the park improvements line item, increasing the originally proposed $20,000 to $45,000 to provide funding for several projects on the department’s to do list.

Salaries and employee benefits were adjusted downward by $39,100 to reflect “more accuracy” in the actual outlay in those categories.

The retirement line item increased $12,400 because the department will participate in the state’s PERF program next year. “The employees are not taking a raise so we can get that started,” said Jonsson. The salary decrease does not reflect any diminishment in the number of employees working for the department.

Jonsson also included allocation requests to renovate the outdoor-accessed restrooms at the community center, maintain the seawall of the municipal pier on Syracuse Lake and purchase a new lawn mower to replace the department’s current 2009 machine.

The board also discussed renovations and improvements to Laudeman Park in Syracuse. Jonsson distributed a vendor preliminary cost estimate of $363,090 for changes such as laying down crushed stone on the walking paths, constructing a 12-by-18-foot shelter, adding picnic tables and benches, grading and repaving the parking lot and seeding two acres of the park with native grass.

The board discussed various alternatives to the quoted prices, which many members felt were too expensive.

For example, the estimate included four picnic tables at $1,500 apiece. Jonsson proposed moving a couple tables from the local baseball diamonds to Laudeman Park and suggested some of the tables and benches, cited at $1,200 each, could be donated.

The vendor also proposed laying crushed stone along 2,100 feet of an 8-foot trail, including the quarter-mile perimeter trail. Jonsson did not see the need for that wide a path. “As long as you can get a wheelchair on the trail, it is as wide as it needs to be,” he said.

Jonsson announced the local Rotary Club “has some money set aside for a shelter. These prices can be reduced or completely taken care of” with donations. The shelter was estimated to cost $40,000.

In other business, the board received the 2019 Syracuse Community Center utilization summary. A total of 3,961 individuals used the community center during the month, bringing the total to 23,025 patrons through the first half of 2019.

The board approved payment of 26 vouchers incurred between June 11 and July 10 for a total of $9,953.01. Products and services provided included phone and utilities, concessions inventory, maintenance supplies, weed and pest control, website maintenance and a drug screen for a new employee.

Program Director Darin Lursen reported this year’s recent Mud Run was a success. “We had the perfect day for it,” he said, estimating 250 people participated in the event.

He said the department’s “next big event” will be the Saturday, July 20, Tour des Lakes bike ride. Participants can register for one of the rides — 25K, 50K, 100K or “one trip around Syracuse Lake” — at www.tourdeslakes.com.

Syracuse Parks and Recreation Board meets at 7 p.m. the second Monday of each month at the Syracuse Community Center, 1013 N. Long Drive.