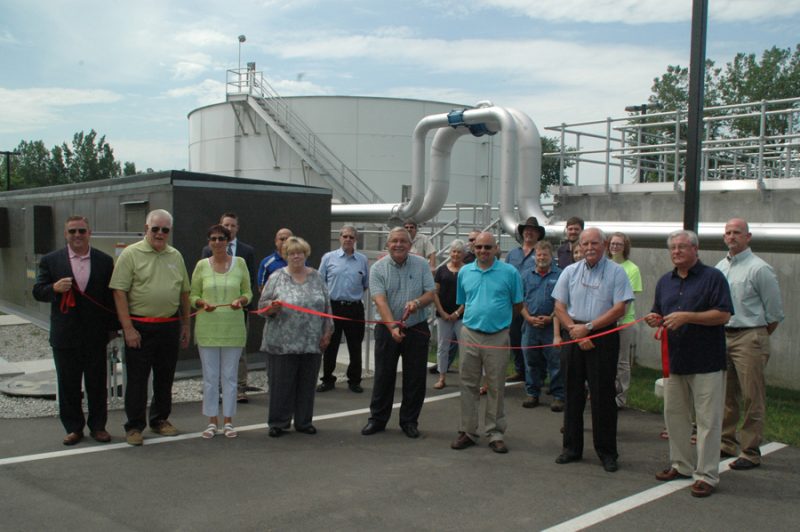 The first item on the agenda concerned malfunctioning control panels in grinder pumps, 29 of which have been replaced to date out of roughly 1,250. According to DLZ’s Casey Erwin, the problem’s source appears to be poorly engineered connections around the panels’ top lights, allowing moisture to corrode electrical components inside. A representative from Astbury Water Technology, the company overseeing the sewer infrastructure, said most of the problems were found during inspections and assured the board no customers have been unable to use the system.

The control panels, provided by Crane Pumps and Systems in Ohio, are under a five-year warranty and have been replaced; however, the four to six week lag time in shipping concerned the board, which hopes to keep enough of the parts in stock to quickly replace defectives, but not too many, as they are “expensive to lay on the shelf.”

On the advice of Astbury, the board decided to keep an eye on the problem until next spring, after the freeze and thaw, to ensure it is not an “epidemic.” In the meantime, there was agreement the six panels in stock was not an adequate buffer and Crane should be pressed to provide more parts as soon as possible. “They caused this,” commented Mike DeWald, board treasurer.

Bob Marcuccilli brought another concern to the board’s attention. The rotary bar screen, which blocks and eliminates floating debris at the treatment plant’s pump station was down to one float with no back-up, which could cause a spill if it goes bad. The problem, he said, needs to be addressed “ASAP.”

During DeWald’s financial report, he said the district’s finances are in “good shape.” He recommended some reserve funds be invested in a freedom certificate of deposit at Lake City Bank, which will provide an annual rate of 1.25 percent interest. The motion passed.

The board also passed a motion allowing Jim Haney, board president, to submit a letter to the U.S. Department of Agriculture stating the LRSD’s construction process is complete.

Kenneth Jones Jr. of JPR reported 1,247 properties in the district, 75.5 percent, are now connected. And 1,486 households, 90 percent, have been issued permits for connections to occur. Weather permitting, he expected 80 percent of the district to be connected by the end of the year.

During public comments, Emily Dougherty, whose family owns property on Shoe Lake, again informed the meeting her family would be taking legal action against the district for the board’s refusal to grant a rate elimination.

The matter was revisited when it was believed Dougherty had paperwork showing she had requested the elimination in an email dated May 4, 2015; however, the district has no record of the email. “My computer says I sent it; yours doesn’t,” Dougherty observed.

She also stated information pertaining to the elimination was handwritten on an easement dating to 2013, but the page with the alleged notations was not found with the easement paperwork.

The request was denied primarily because the property did meet elimination requirements — abandoning its septic system — by July 5, 2015, when the bond was issued.

“We are bound by our rules,” Marcuccilli stated.