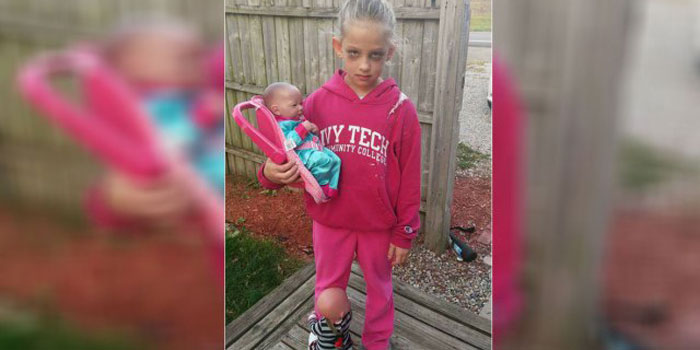 GREENTOWN — Spit up and dark eye circles have never had moms laughing so hard.

An Indiana girl’s “mom” costume might be so accurate it’s frightening.

Rachael Fansler Beachy posted the picture of her friend’s daughter Lainie, 7, in her Halloween costume on her Facebook Saturday. The look on her face is perfect, summing up how many moms feel on a daily basis.

She’s wearing a pink sweatshirt – complete with spit up on the shoulder, pink sweatpants and flip flops. She’s carrying one baby in a car seat carrier and another baby is crawling up her leg. She has dark circles under her eyes and her hair is in a messy “mom bun.”

The photo, posted Saturday, had been shared more than 12,000 times by Monday morning with more than 100,000 likes.

Lainie’s mom, Jess Griffin, says it was her daughter’s idea to dress as a mom and Lainie picked out the clothes. Her younger brother and sister are often crawling at her mother’s feet so attaching one baby to her leg was a given.

Griffin says she added the final touches including the spit up and dark circles.

When Lainie approached her with the idea of dressing as a mom for Halloween, Griffin was thrilled. With five kids, she does what she can to be thrifty and make costumes with stuff they already have around the house.

“I said, ‘Perfect, we have everything here,’” Griffin recalled.

Griffin says it’s ironic the photo has gotten so much attention because of all her children, Lainie is the most soft-spoke and shy.

“Her personality is not this,” she laughed.

The Griffins live in a small town in Indiana and never imagined the photo would travel as far as it has.