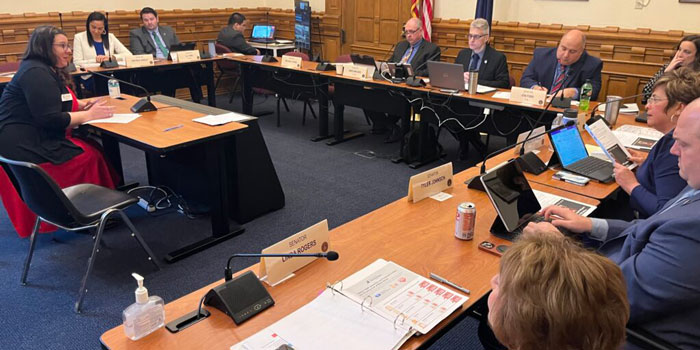 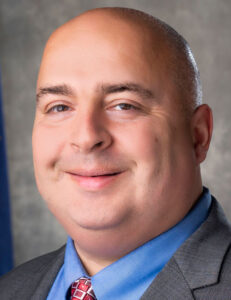 Hoosier families in deep poverty might be getting more help from the state government through the Temporary Assistance for Needy Families program if senators have their way.

“I hate to say ‘bare minimum,’ but I feel like this is the bare minimum we can do,” Sen. Greg Walker, R-Columbus, said Monday during a Senate Family and Children Services Committee he chaired.

Bill author Sen. Jon Ford, R-Terre Haute, highlighted shortcomings within the program, including how less than 10% of the state’s annual $206 million goes to families and Indiana has one of the stingiest eligibility thresholds in the country at 13-16% of the federal poverty level (depending on family size).

“This is really a workforce development program that can help women and families get the skills to improve their income (by providing) things like job training, childcare, transportation,” Ford said in committee. “All the things that somebody needs to help improve themselves.”

The increase in benefit amounts and eligibility guidelines under Senate Bill 265 wouldn’t cost the state more money because Indiana already doesn’t spend all of its allotment of federal funding, with $54.4 million leftover from previous years.

A look at TANF in Indiana

On average, states spend just over 22% of their funds on direct assistance, the largest portion, followed by 16.6% on childcare and 15% for “other benefits and services,” according to a December 2022 report from the Congressional Research Service, part of the federal government.

“The transfer of TANF funds to the CCDF (Child Care and Development Fund) would take precedence over any future increase in cash assistance,” the fiscal analysis said. “Indiana transfers federal TANF Block Grant money to the CCDF before any other expenditures are made. In recent years, this transfer has been at the maximum amount allowable, or $61.8 (million) in 2020.” 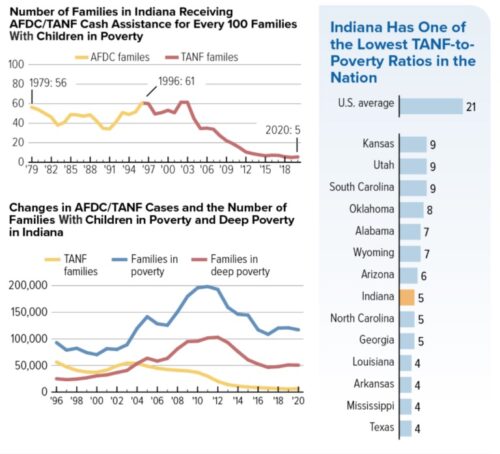 Indiana has one of the lowest TANF-to-poverty ratios in the nation. Chart from the Center on Budget and Policy Priorities.

Benefits for the program haven’t increased since 1988, before the welfare reform of the 90s, and haven’t kept up with inflation, remaining at a maximum monthly benefit of $346 for a family of four.

But families would be lucky to receive that much. According to the December Monthly Management Report from the Family & Social Services Administration, the average one-parent family received $195.59, or $297.69 for two-parent families per month.

Just one in 20 families living in poverty received TANF direct assistance in 2020, or 5%, compared to 21% nationally. Only four states rank lower than Indiana in terms of cash assistance — Mississippi, Texas, Arkansas and Louisiana.

TANF, implemented as part of the Clinton administration’s welfare reform in the mid-90s, actually served more families in 1995/96, with 56,412 families receiving benefits compared to 92,933 families in poverty and another 25,012 in deep poverty.

According to Ford, Indiana’s low eligibility means that any family making more than $307 per month would be considered too wealthy for the program. Under his proposal, the cutoff would increase to $950 per month.

“People do not need to make much money to disqualify themselves from TANF in Indiana,” Ford said in an interview last month.

Under Ford’s bill, eligibility would increase to 50% of the federal poverty level over two years, still under the federal definition for ‘deep poverty.’ Roughly 600 families previously denied each year would now qualify for the program.

Benefits would also increase for families. Under Indiana statute, amount maximums are fixed at $155 for one child, with another $65 for each additional child, or $255 for one parent and child.

Ford proposes increasing those to $248 for a child, with another $104 for each additional child, or $409 for a parent and child. Benefits would also regularly be adjusted, similar to Social Security, to account for inflation.

Ford’s bill would also continue to prioritize the maximum transfer to CCDF over direct benefits.

Jessica Fraser, the director of the Indiana Community Action Poverty Institute, credited the fund’s flexibility, for both the state and recipients, for making it a powerful anti-poverty tool.

“There is so much potential in the TANF program to help support families who are extremely vulnerable to get on a track that would allow them to reach their potential, to meet their goals, to explore ways they can get into the labor force and to contribute to their communities because it’s so flexible,” Fraser said. “The flexibility can be a blessing and a curse.”

TANF is the only program that gives cash to families with no caveats, unlike other assistance programs that only cover food, rent or utilities.

How does TANF’s flexibility benefit Indiana? The following programs could get funding from the program, though how much funding isn’t always clear.

“Families need cash because kids need diapers and band-aids and school field trips — all of those things that come with life,” Fraser said. “Parents, especially extremely low-income parents, need cash to meet those unexpected and everyday needs that arise when you’re taking care of a family.”

TANF is the only government program that covers diapers.

But that flexibility benefits states as well. Administrators routinely spend funds with little federal oversight and state governments are responsible for tracking which organizations get money and if they do anything with it.

The flexibility of TANF makes the program ripe for abuse, as seen in Mississippi. The wide-ranging scandal, which has ensnared the state’s former governor and retired football star Brett Favre, diverted at least $77 million in funds for impoverished families to things such as building a volleyball stadium and shoring up a pharmaceutical company.

In the past, even Indiana’s spending has caused some concern — such as when the state used $61 million in TANF funding to pay textbook fees for low income families. Indiana is one of only seven states to charge families for school textbooks.

Some advocates worry that state governments treat the program as a “slush fund to plug budget gaps,” rather than prioritizing needy families.

No representative from FSSA appeared before the committee to testify on the bill.

Repeatedly, Ford has emphasized the program’s potential to train Indiana’s workforce. Many of those utilizing TANF don’t have a high school diploma or marketable job skills — both areas where TANF funding can close the gap. The Department of Workforce Development, in their budget presentation, specifically asked for millions more to fund their adult education programs, citing a workforce shortage.

Ford has authored a bill on TANF eligibility in 2022, 2021, 2020 and 2019. The bill twice passed the Senate with overwhelming support only to die before the House Ways and Means committee.

In an interview last month, Ford expressed concerns about the bill’s future in the Senate, worrying that senators might tire of it. But new leadership in the House, including a new chair of the Ways and Means Committee, gave him the push to try again.

“To be honest, I wasn’t planning on bringing this if we didn’t have positive discussions with the House,” Ford told his fellow committee members Monday.

The bill passed unanimously on an 8-0 vote and now moves to the Senate for consideration.