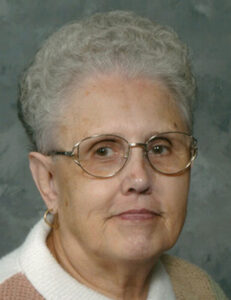 She came into this world with her twin sister, Martha Jane on April 9, 1938, in Warsaw, to Margaret Alice (Towns) Tucker and Chauncey Constant Tucker. Nean was a lifetime resident of Kosciusko County. She was raised in Claypool and graduated with her friends from Claypool High School in 1956. She studied for a year at Grace College in Winona Lake.

Nean enjoyed watching sports, walking and bicycling, going out to eat and spending time with friends. She was a longtime member of Claypool United Methodist Church, and she also attended Winona Lake Free Methodist Church. Nean enjoyed serving her church in many ways including playing the piano. She loved music, and also enjoyed sharing her piano talents at Grace Village Retirement Community in Winona Lake when she was a resident there. Nean was a devoted worker having spent many years with the Free Methodist Headquarters and working at Light and Life Book Store. She loved her family very much and walked closely with her Lord and Savior Jesus Christ.

Margaret’s life will be celebrated with a graveside service at a later date at Graceland Cemetery, Claypool. Arrangements were entrusted to Redpath-Fruth Funeral Home, 225 Argonne Road, Warsaw.