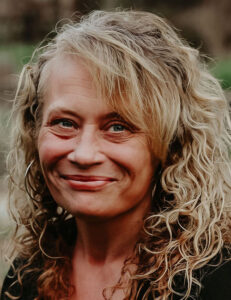 Cherrie was born June 7, 1976, to Leroy and Lindal Weaver, in Goshen. On March 4, 1995, she married James L. Fox, and together they raised three daughters, Alexandria, Dannielle and Dakota.

Her employment was diverse and wide-ranging. She taught students with special needs at Syracuse Elementary, eventually received her real estate license and, in the months before she died, was in the process of becoming a recovery and life coach.

Cherrie was everyone’s friend. She was a talented gardener and could turn any piece of scrap wood into a cherished family heirloom. She was a collector of, well, everything, from people to cans of spray paint. She knew how to cook a mean fried chicken. Cherrie enjoyed deep conversations about the meaning of life, spirituality and religion with anyone who could match her curiosity and wonder at the world. She was interested in the mysticism of nature and the world of physics, which taught her the first law of thermodynamics: energy is neither created or destroyed. Her family takes comfort in that, now knowing that her energy is not gone, just, though it’s hard to imagine, less orderly.

Cherrie’s regrets were few but included falling asleep on a beach for too many hours at Disney World, resulting in the worst sunburn of her life, and each and every time she ran out of those d— Marlboro Reds.

Cherrie’s first philosophy in life was: People are so good. She believed wholeheartedly that perfect is the enemy of good and loved people not in spite of but because of their flaws.

Her second philosophy was: I can do hard things. She took hardship as a personal challenge and outlasted the life expectancy of her terminal diagnosis by over eight months. While her lifespan was less than average, her life was anything but — she loved hard, gave freely, laughed often and was full of faith.

Cherrie was preceded in death by her father, Leroy; her mother, Lindal; and a sister-in-law, Lindsay. She is survived by her husband, Jim; her brother, Erik; her three daughters, Alexandria, Dannielle and Dakota; four grandchildren, Koda, Royal, Venus and Barrett; and a very loving extended family.

Her funeral service will be held at 3 p.m. Saturday, Jan. 28, 2023, at Titus Funeral Home and Cremation Services at 1001 S. Huntington St., Syracuse. Friends and family are welcome to gather at the funeral home two hours prior to the service, from 1-3 p.m. Saturday.