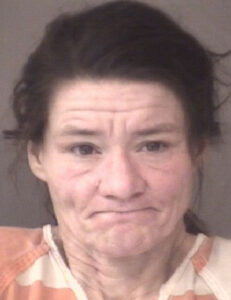 CLAYPOOL — Official charges have been filed against a Claypool woman who allegedly set a relative’s vehicle on fire.

On Jan. 23, emergency personnel responded to a vehicle fire at a Claypool residence. Upon arrival at the scene, law enforcement saw a 2006 Ford Escape engulfed in flames.

According to court documents, officers walked to the residence’s backyard and saw Carter holding a shotgun. Carter allegedly yelled at the officers and told them to leave because they were trespassing. She repeatedly refused to put the shotgun down and speak with officers. Law enforcement then contacted two of Carter’s relatives and had them come to the home.

Kosciusko County’s SWAT team then arrived at the scene and, after a three-hour standoff, took Carter into custody. Upon searching Carter’s person, officers found meth and a cigarette lighter.

Carter was booked in the Kosciusko County Jail on Jan. 23.