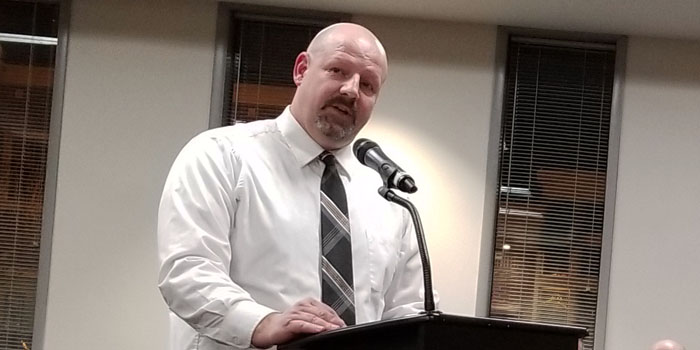 Warsaw Police Department Chief Scott Whitaker, one of three defendants being sued by a Syracuse family for alleged violations of constitutional rights, has responded to the lawsuit against him. InkFreeNews file photo.

SYRACUSE — Warsaw Police Chief Scott Whitaker, WPD Capt. Paul Heaton, and the City of Warsaw have responded to a lawsuit against them regarding alleged violations of a family’s constitutional rights.

The initial suit says Whitaker and Heaton unlawfully entered a Syracuse family’s home during New Year’s 2022 after Whitaker became concerned his underage daughter was attending a party there. Pamela, David and Solomon Gregory are the plaintiffs in the case.

In an answer filed on Jan. 4 in the United States District Court Northern District of Indiana – South Bend Division, Whitaker and Heaton admitted to traveling to the Gregorys’ home to look for Whitaker’s daughter. The answer also states Heaton attempted to take physical control of Solomon at one point. However, they deny Heaton entered the Gregorys’ home without permission.

Heaton did ask Solomon if Whitaker’s daughter was in the home and that Solomon said he did not believe she was there. The defendants also deny Heaton telling Solomon he did not need a warrant to search the home.

Syracuse Police officers and Kosciusko County Sheriff’s Office deputies were called to the property for assistance by Heaton, according to the answer.

Whitaker, Heaton, and the City of Warsaw further deny all the legal claims listed in the suit by the Gregorys, which are as follows:

The affirmative defenses listed in the answer state the following:

Whitaker, Heaton, and the City of Warsaw are requesting judgment be entered in their favor.