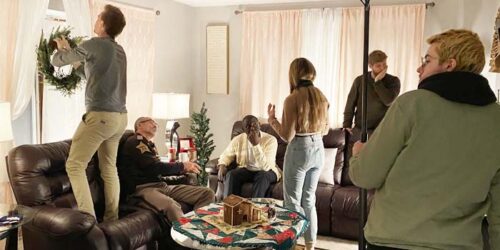 In this InkFreeNews file photo from March 2022, the cast and crew of the movie “Now I See” prepare for a scene shot in a house in Mentone. The drama was filmed in Fulton and Kosciusko Counties, and its producer Joshua Stutzman said it’s in final editing.

MENTONE — The producer of a movie filmed locally last year says the picture is in final editing.

Anthem Entertainment’s Joshua Stutzman said the drama “Now I See” should be in “picture lock” this weekend.

That means “the edit is finished and the composers, sound designers and mixers, visual effects artists and colorists will take over and make the final changes to the film based on the edit,” he said.

“Now I See” was filmed in spring 2022 in parts of Fulton and Kosciusko counties, including Mentone, where Stutzman’s originally from. His wife Carissa Stutzman was inspired by a local home to write the screenplay.

She also directed the film in which a blind woman Claire Lewis searches for her missing six-year-old daughter Briar. The film’s actors include Annalise Basso who’s played LJ Folger on the TV series, “Snowpiercer,” and Steven Ogg, who appeared as Simon on “The Walking Dead.”

Joshua Stutzman also detailed to InkFreeNews the final stages of completing the movie before it can be distributed. That includes constructing a musical score and adding sound and special effects.

The film will then be ready for distribution or marketing to hopefully be picked up to go into theaters or another screening medium.

“We do not have a distributor locked, but we have at least three interested in screening the film upon completion in consideration of distribution,” said Joshua Stutzman.

A release date will be dependent on a distributor’s decision, he said.

“We would like to say how grateful we are to the Mentone community and surrounding area for their support of this film,” he added.