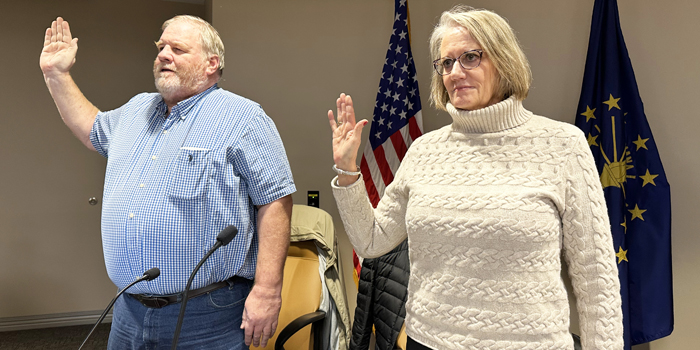 Warsaw Board of Zoning Appeals members Bob Coffelt (L) and Tammy Dalton take the oath of office Monday, Jan. 23, administered by Mayor Joe Thallemer (not pictured). This is Coffelt’s first term on the BZA and possibly Dalton’s fourth, though she and Thallemer weren’t sure at Monday’s meeting. Photo by David Slone, Times-Union.

WARSAW — The biggest decision the Warsaw Board of Zoning Appeals had to make Monday night, Jan. 23, was who would serve as president for 2023.

Board member Tammy Dalton nominated Rick Keeven for the job and Bob Coffelt seconded her nomination, but Dan Smith nominated Dalton and Jeff Johnson seconded that nomination. Keeven abstained and when the voting took place, it was a tie.

Keeven withdrew his name from consideration so another vote was taken and Dalton won the election. Keeven was then nominated for vice-president by Dalton and he easily won.

Dalton said she would not be able to attend the February meeting, so as vice president Keeven will have to run February’s meeting.

Before the election of officers, Mayor Joe Thallemer gave Dalton and Coffelt their oaths of office. This is the first term for Coffelt, who represents the Warsaw Plan Commission, on the BZA and possibly Dalton’s fourth. She and Thallemer weren’t sure how many years Dalton has served on the board, but the mayor thanked her for her willingness to serve the city.

The last two actions taken by the board were to approve the Dec. 28 meeting minutes and to adjourn.