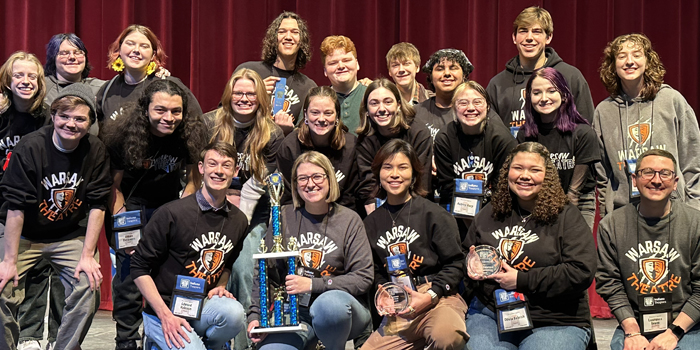 Pictured is the cast of “Where Words Once Were.” Photo provided by Warsaw Community Schools.

WARSAW — The Warsaw Community High School Select Theatre cast of “Where Words Once Were” by Finegan Kruckemeyer placed first at the Indiana State Thespian Conference against 10 state qualifying troupes.

The group was also awarded Best Technical, Chapter Select and received a gold ranking in the Thespian Honor Portfolio.

“A simple congratulations wouldn’t do justice to acknowledge this accomplishment,” said WCHS Principal Troy Akers. “The time, energy, and efforts from Melany Morris, theatre teacher and director, and the cast have produced a performance worthy of this state championship. Well done.”

“We are so proud of these students and instructors for their dedicated work in the theatre arts,” said Warsaw Community Schools Superintendent Dr. David Hoffert. “These awards represent a tremendous achievement.”

WCHS Select Theatre will be representing Indiana at the International Thespian Festival in June. The International Thespian Festival is a week-long celebration at Indiana University Bloomington and is an amazing honor. Students will attend workshops with theatre professionals, watch other high school performances and so much more. More information will be forthcoming in the coming weeks on how to support the local WCHS theatre troupe in the next steps of their journey.