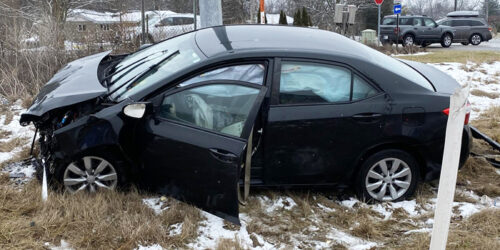 Three people were taken to the hospital for evaluation following being in a wreck in which this vehicle was involved on Sunday, Jan. 22, at U.S. 30 and Old Road 30 East in Warsaw. InkFreeNews photo by Leah Sander.

She said she wasn’t sure if she wanted to continue through the intersection or turn. Sleighter didn’t realize the traffic signal was red.

She drove into the intersection and collided with a black 2016 Toyota Corolla driven by Stephen Tse, 29, South Wentworth Avenue, Chicago, Ill.

Tse said he tried to avoid Sleighter’s vehicle that had pulled out in front of his, but couldn’t.

Sleighter was cited for driving while suspended-infraction. Her vehicle’s registration was suspended as well.