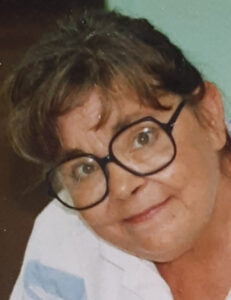 Sandra was born Nov. 12, 1940, in Chicago, Ill., the daughter of (the late) Valentine Adolf Keiper and Nadine (Tooley) Keiper. She graduated from Grovertown High School with the Class of ’58 and in January 1959, she married Charles L. Carnes at Koontz Lake. Charlie preceded her in death in April 2013 after 54 years of marriage.

Sandy was a server at Stacy’s in Leesburg and retired after 30 years at the restaurant. She and her husband were fans of bluegrass music and were longtime members of the Northern Indiana Bluegrass Association, assisting with the organization and scheduling of bands performing at area festivals. Sandra was an avid reader who enjoyed the time she spent with family and friends. She could often be found on her golf cart, visiting her neighbors at the lake.

In addition to her parents and her husband Chuck, she was also preceded in death by a daughter, Laura Byrd; daughter-in-law, Leslie Carnes; son-in-law, Harold Rummer; and her brothers, Tom Keiper, Chuck Keiper, Dave Keiper and Sheldon Keiper.

The family’s preferred memorial is the Animal Welfare League of Kosciusko County, online at www.awlwarsaw.com or by mail to 1048 South CR 325E., Pierceton, IN 46562.