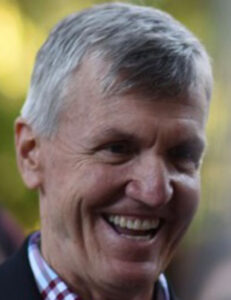 Born in suburban Chicago, Ill., Mike was the fifth of nine children, his proud father’s first son. He graduated from Warsaw Community High School and earned a Bachelor of Science in economics from Indiana University. He was an options trader for over 30 years in San Francisco, Calif., and Chicago, Ill. Mike had a nomadic spirit and traveled extensively in the U.S. and around the globe, before and after settling in California, where he never failed to savor every aspect of the coastal lifestyle, with gusto and gratitude, each and every day.

A lifelong athlete, Mike biked, trekked and camped where others would never dream of doing so. With Mike, there were no misadventures, only adventures. He was equally at home bushwhacking to backcountry campsites, quaffing pints in pubs and brunching in five-star hotels — preferably always in his signature flip-flops and shorts. His laid-back attitude was captured by one of his favorite catchphrases when pressed to pin down his plans: TBD, he’d say. To be determined.

Nicknamed “Father Time” by his three children, Mike wasn’t the youngest of fathers, only the youngest at heart. He was carefree and curious like a child, but with the unfailing patience and incisive intellect of a wise elder. He was often the last to board the plane, but the first to find the silver lining. He modeled for his children how to keep an open heart and mind, doing no harm and departing life as he lived: with grace and humor.

Mike loved babies, pets, the music of John Prine, any body of water, most foods and drinks and above all, his large and loving family, whose annual gatherings in Indiana were a top highlight of each year he spent on this earth. He had a gift for making and maintaining enduring friendships. During his final weeks, Mike was surrounded by family and friends, many of whom journeyed from around the country to see him. He passed away in the warm embrace of his children, George, Mary and Celeste Elsbury, with his beloved dogs Elvis and Trixie, and his former wife Sylvia Elsbury, by his side.

A celebration of Mike’s life will be held later this year. Time and place, as Mike would say, TBD. Memorial remembrances may be made to the Kosciusko County Community Foundation, www.kcfoundation.org/funds/mary-o-elsbury-memorial-scholarship-endowment/