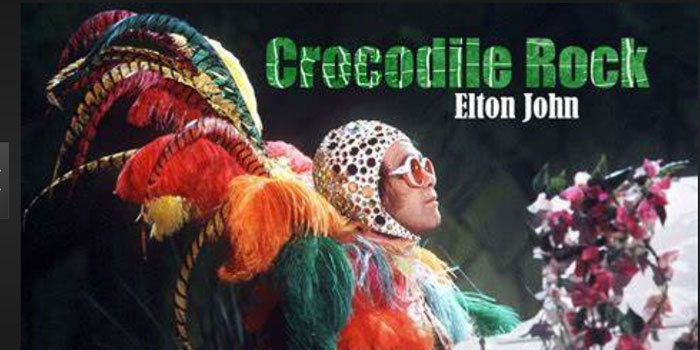 “Crocodile Rock” became Elton John’s first Number One hit single on MCA Records. (In time, eight more would follow.) But rather than appreciate his rare good fortune, John apparently grew weary of the song and later grumbled, “The last time I have to sing ‘Crocodile Rock,’ I will probably throw a party … It became a big hit, and people love to sing along with it. … I play to amuse people and to entertain people, but I have to say, when the last show is done at the end of the last tour, I will never sing that song again.”

“I remember when rock was young.

“Me and Susie had so much fun.

“Had an old gold Chevy and a place of my own.”

“Crocodile Rock” is a microcosm of the past. A retrospective fueled by longing for bygone days with a girlfriend. Priceless moments impossible to retrieve. Yet Elton’s lyricist Bernie Taupin has admitted, “I don’t mind having created it, but it’s not something I would listen to … I don’t want people to remember me for ‘Crocodile Rock.’ I’d much rather they remember me for songs like ‘Candle in the Wind,’ songs that convey a message, a feeling. Things like ‘Crocodile Rock,’ which was fun at the time, was just pop fluff.”

Johns’ hit song was based on two Bill Haley oldies — “(We’re Gonna) Rock Around the Clock” and “See You Later, Alligator” (“After ’while, crocodile”).

“But the biggest kick I ever got.

“Was doin’ a thing called the Crocodile Rock.

“While the other kids were rockin’ ‘round the clock.

“We were hoppin’ and boppin’ to the Crocodile Rock.”

John told rock historian Fred Bronson, “I wanted it to be a record all about the things I grew up with, all the great ‘50s and ‘60s records that we used to love. I always wanted to write one song, a nostalgia song, a rock and roll song which captured the right sounds. ‘Crocodile Rock’ is just a combination of so many songs, really — ‘Little Darlin’,’ ‘Oh, Carol,’ some Beach Boys, they’re in there as well, I suppose. Eddie Cochran, too. It’s just a combination of songs.’

John (who was born Reginald Kenneth Dwight in 1947) was 10 when his parents divorced. By then the chubby, soft-spoken lad had six years of piano playing under his belt. With his rock-music-hating father out of the picture, John received encouragement from his mother when she handed him a copy of Elvis Presley’s breakout hit “Heartbreak Hotel.” “I went on from there,” he says. “Pop was my whole life.” He began using his pocket money to buy records and then pick out their melodies by ear on the family piano.

In “Crocodile Rock,” Elton John manages to create an enduring music masterpiece that roars along with high-octane gusto, pounding piano lines and whirling synthesizer riffs adding to the retro-rock feel, as do the growling guitar lines, pulsating bass notes and throbbing drumbeats.

It is, one might say, a just-about-perfect pop disc.