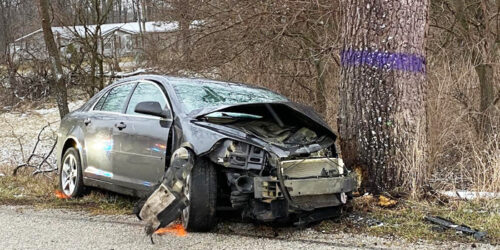 BARBEE LAKE — The Kosciusko County Sheriff’s Office has released the identity of the driver killed in an early Friday morning, Jan. 20, wreck near Barbee Lake.

Hannah Lynn Rogers, 36, Pierceton, was pronounced deceased at the scene by the Kosciusko County Coroner’s Office as a result of injuries sustained in the motor vehicle crash.

According to a KCSO press release, Kosciusko County officials are still investigating the crash.

KCSO deputies and emergency personnel responded this morning at 8:17 a.m. to the wreck on CR 650E near South Barbee Drive. Emergency personnel arrived on the scene and located a black Chevy passenger car that had struck a large tree.

Preliminary investigation determined the Chevy had been traveling southbound on CR 650E and for an unknown reason, went off the east side of roadway and struck a large tree.

The KCSO was also assisted at the scene by Tippecanoe Township Fire Territory.