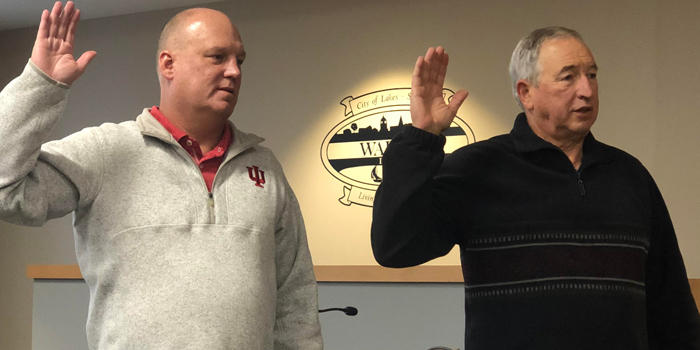 Brad Johnson and Mike Klondaris were sworn in as Warsaw Redevelopment Commission members during a Jan. 20 Board of Public Works and Safety meeting. From left are Johnson and Klondaris. InkFreeNews photo by Liz Shepherd.

WARSAW — Several road closure requests for upcoming events in downtown Warsaw were approved during a Jan. 20 Board of Public Works and Safety meeting.

Demopoulos said the club has worked together with Warsaw Police Department and Warsaw-Wayne Fire Territory on the road closures. WWFT is willing to temporarily stage personnel and trucks from Station One elsewhere during the event.

Kosciusko Chamber of Commerce Member Relations Manager Scott Wiley also attended the board meeting and requested closures for Main Street Warsaw’s Third Friday events from April through September. Main Street Warsaw is moving from First Fridays to Thirds due to conflicts the Chamber has seen with holidays and other events during the first weekend of a month.

The road closures for Third Fridays, which will take place from 3:30-9 p.m., are for Center Street, between Lake and Indiana Streets; and Buffalo Street, between Main and Market Streets.

These same roads will also be closed on Oct. 27 and Dec. 1 for the annual Spooktakular and Downtown Warsaw Christmas Celebration events.

The board also approved an annual agreement with the Kosciusko County Farmers’ and Artisan Market, which will be set up on Center Street, between Lake and Buffalo Street, from 9 a.m. to 1 p.m. every Saturday from May through October.

In other business, the board approved WPD accepting grants from the K21 Health Foundation and Kosciusko County Community Foundation. The grants, totaling $51,579 and $15,000, respectively, will both be used for rescue dive equipment.