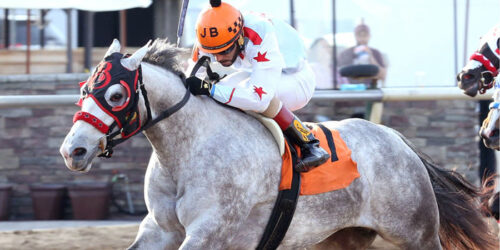 INDIANAPOLIS — A new study conducted by Purdue University shows the economic impact of Indiana’s horse racing and breeding industry has more than doubled over the past decade. The university said the industry contributed $933 million directly to the state’s economy and generated a total of $1.44 billion in economic activity in 2021.

“We knew (the impact) was more because the racing and horse industry has grown, but we weren’t sure it was quite double, and that’s a very good omen for the state of Indiana,” said Indiana Horse Racing Commission Chairman Philip Borst.

Borst talked about the drivers of the industry’s growth in the state in an interview with Inside INdiana Business reporter Alex Brown. He said the collaborative nature of the industry in Indiana is a key factor.

“Whether it’s the horsemen, the trainers, the drivers, the racetracks, the commission, everybody works and pulls in the same direction,” said Borst. “So, we’ve got a very good environment for horse racing and for breeding and so forth, and I think that has a lot to do with it.”

Hoosiers placed more than $380 million in total bets at Indiana’s two racetracks, also called racinos, resulting in $129 million in federal tax revenues and $77 million in state and local tax collections, according to Inside INdiana Business’ partners at the Indianapolis Business Journal.

Joe Morris, senior vice president of Caesars Entertainment Inc., which owns the two venues, echoed the importance of collaboration among the players in the industry.

“We work closely with the horsemen organizations to ensure we are traveling in the right direction at all times,” Morris said in written remarks. “Our relationship with these groups is imperative to continue the growth of our industry. Our collaboration with the horsemen and horsewomen in this state, the Indiana Horse Racing Commission and the Breed Development programs is second to none in the United States, and we are not done yet.”

The Purdue study surveyed racetracks and individuals involved in the state’s racing and breeding industry and received over 630 responses.

Borst said breeding is a big part of the economic impact of the industry for Indiana. The state saw a nearly 60% increase the number of horses owned, trained or bred between 2007 and 2020, according to the study.

The study also showed a 25.1% increase in Indiana-owned property related to the racing and breeding industry and 47.9% increase in equipment investments.

“We have seen a lot of new farm development in recent years, especially around Horseshoe Indianapolis,” said Joe Davis, president of the Indiana Horsemen’s Benevolent and Protective Association. “Plus, these facilities are directly impacting their local communities by hiring additional workforce, purchasing supplies, and bringing tax dollars to the state.”

Borst agreed, saying the industry is a catalyst for job creation.

“Just think of all the things that have to be done, all the way from the care of [the horses] daily to the driving. You’ve got veterinary jobs, too. The equipment that it takes, the investment that they put into this, it’s an expensive industry. It’s not for the faint of heart, but it sure has a lot of rewards.”

A bill to legalize iGaming in Indiana is expected to be considered during this year’s Indiana General Assembly.

Borst emphasized that even though Indiana only has two main horse racing tracks, the industry is felt statewide, encompassing all 92 counties.