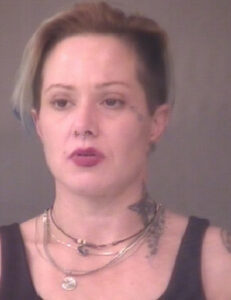 WARSAW — A Milford woman was recently arrested after allegedly burglarizing a storage unit in Warsaw.

On May 24, 2022, a Warsaw Police officer responded to a burglary report. Upon arrival at the scene, the officer spoke with a man whose storage unit was broken into.

According to court documents, several items in the unit were knocked down and other items were missing. The man told the officer he believed he was missing a set of golf clubs, two tents, and an industrial vacuum. The initial approximate value of the missing items was $2,800.

Officers obtained video surveillance from the storage unit and saw a vehicle pull into the aisle where the burglarized storage unit was at on May 20, 2022. The vehicle’s registration returned to Randall E. Koth, 48, Syracuse.

Footage showed Koth getting out of the vehicle, opening his trunk, and retrieving a pair of bolt cutters. Koth walked toward the man’s storage unit and attempted to try to cut the lock on it with the bolt cutters. A woman, later identified as Orten, was with Koth and appeared to be watching for anyone that might be in the area.

Koth then cut the lock and appeared to motion to Orten to come over. Both Koth and Orten entered the unit and removed several items, placing them in Koth’s vehicle.

Footage showed Koth closing the storage unit’s door, with both Koth and Orten leaving the scene in Koth’s vehicle.

Koth has a pretrial conference for this case at 8:30 a.m. Thursday, Jan. 19, in Kosciusko Superior Court One.