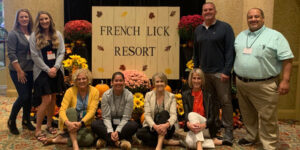 JDAI receives roughly $70,000 per fiscal year to use toward the safety and well-being of local juveniles through programs and detention alternatives. Their ultimate goal is to maintain the balance of public safety and the best interest of juveniles in participating counties.

Some of the programs they plan to continue or implement this year are a trauma response program for educators and youth, incentivized probation and the policing the teen brain program:

As JDAI was formed to help mitigate the impact of detention on youth, their programs are intended to give a juvenile the chance to learn rather than be subjected to a potentially harmful environment.

They take a reformed approach to detaining juveniles through a screening tool, considering the juveniles most serious alleged instant offense, age at first adjudication, history of escape, failure to appear and delinquency, current legal status, aggravating factors and mitigating factors.

Through this evaluation they are able to choose the best course of action for each individual juvenile. Based on their score, it may be recommended that a juvenile is released, released with conditions or detained.

“Detention and commitment to (the Indiana Department of Correction) can have long-term negative effects, so when we don’t send them and are able to deal with them in the community, there are all those kids who don’t feel those negative effects that disrupt education, family and mental health,” said JDAI Co-Coordinator Kara Shively.

Detention is seen as the last resort and is only taken if absolutely necessary; it’s their mission to ensure that issues with juveniles are handled carefully and with regard for their long-term future and success.

“If we detain someone, we have to have them back in front of the judge in 48 hours. More times than not, they just go home. So what did we really accomplish in removing a child from the home, putting them in a situation that is going to be very harmful to them? Nothing changed in 48 hours,” JDAI Co-Coordinator Dana Bailey said.

Over the past year, JDAI has been able to significantly decrease felony petitions filed, detention costs, IDOC commitments and secure detention admissions through over 20 programs.

They plan to continue working diligently to keep these numbers down and act in the best interest of the juveniles and general public through their programs and strategies this year.