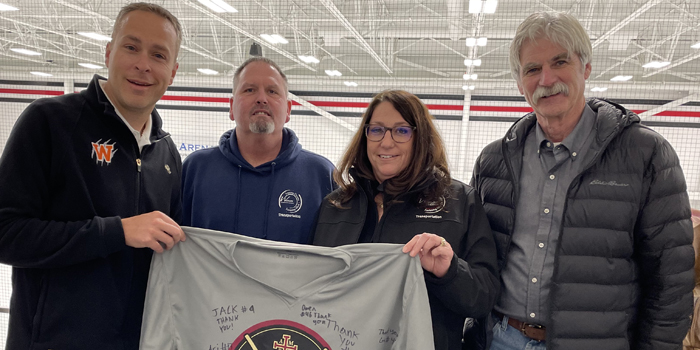 This recognition was part of the return to ice for the team after a tragic bus accident in Warsaw on Nov. 12, 2022. On that day, WCS employees Jim LeMasters, Mark Fick, Kristy Newton and Dr. David Hoffert were made aware of the serious bus accident and quickly arrived on the scene.

“When we received the call, we did not know if the bus was part of WCS or another school,” said WCS Superintendent Dr. David Hoffert. “Arriving on the scene, it was a very scary sight. The WCS team quickly provided a bus for transporting of students, communicated with team parents and school officials and helped escort parents to the local hospitals. While the students were not Warsaw Tigers, we quickly saw them as part of our community and we treated them as we would our local families.”

The Saint Ignatius JV team postponed a considerable amount of their season to help recover from the accident. Jan. 15 was their first game and an invite was sent to WCS as part of their celebration and healing.

Prior to the game, those who went to the accident scene were recognized on the ice. A special hockey jersey with notes from the team members were presented to each Warsaw department or organization that responded to the bus accident.

“It was a special moment to see the students competing,” said WCS Transportation Director Mark Fick. “We were overwhelmed by the hugs, thanks and caring of the parents.”

Following the game, a reception was held to reconnect parents, players and the Warsaw responders.

“These students have continued to stay in our thoughts and prayers,” said WCS Assistant Director of Transportation Kristy Newton. “We see them as a special part of our Warsaw community and their school now holds a place in our hearts.”

“The reaction to the accident is a perfect example of how our schools respond to the needs in our community and the caring for all students,” said LeMasters. “Our schools have a special caring heart and mission.”

While at the game, the WCS team learned that members of the Lady Tigers basketball team had sent multiple get-well cards. These handwritten and heartfelt notes were prominently displayed in the arena hallway. Hoffert noticed the cards and sent a text to Coach Lenny Krebs.

“It was evident to see how much the well-wishes meant to their team, parents and the student body of Saint Ignatius,” said Hoffert. “We will be continuing to follow their team and their recovery.”

All but their students were able to return to the team. Those three have returned to school classes and continue to heal. 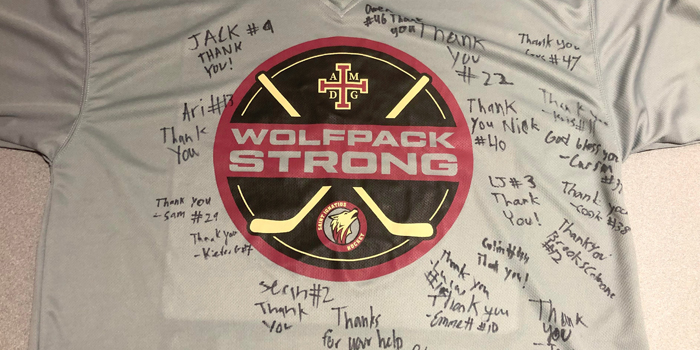 A close-up of the jersey, which was displayed at a Warsaw School Board meeting on Jan. 16. InkFreeNews photo by Liz Shepherd.