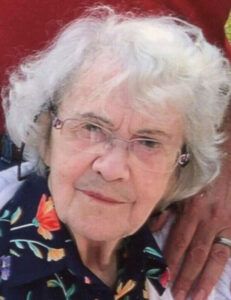 She was born July 31, 1931, in Kimmell, the daughter of (the late) Herbert and Ruby Ann (Lockhart) Byer. Mary Lou graduated from Wolf Lake High School with the Class of ’49 and went on to earn her degree at Fort Wayne Bible College. On April 14, 1954, she married Lester A. Phipps in Ormas; he preceded her in death on Oct. 23, 2017, after 63 years of marriage.

She had been a member of Fellowship Baptist Church since 1964 where she sang in the church choir and taught Sunday School for over 30 years and started the AWANA Program. Mary Lou owned the Kitchen Klutter shop in Warsaw and later worked at Kline’s Apparel and also at Miller’s Merry Manor. She was a volunteer at Heartline Crisis Pregnancy Center for over 30 years. She truly enjoyed the time she spent with family and friends and also enjoyed reading and working on her stamp collection and puzzles.

In addition to her husband, Mary Lou was also preceded in death by a daughter, Brenda K. Phipps; brothers, Eugene Byer, Herbert Byer, Jr. and Robert Byer; and her sisters, Betty Wolfe and Katherine Holt.

The family’s preferred memorial is Heartline Pregnancy Center, online at www.heartlinepregnancycenter.org or by mail to 1515 Provident Dr., No. 180, Warsaw, IN 46580.