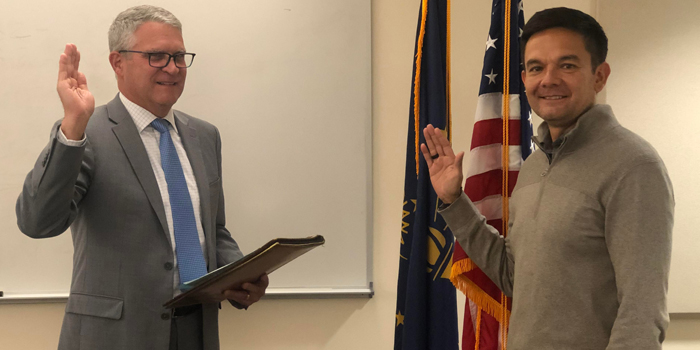 Warsaw Community Schools’ Attorney Tim Shelly swears in new Board Member Tom Westerhof at the Board of Trustees Jan. 10 work session. From left are Shelly and Westerhof.

WARSAW — Warsaw Community Schools’ Board of Trustees focused on the importance of teamwork during unexpected events at their Jan. 10 work session.

At the meeting, WCS Superintendent Dr. David Hoffert told the board that WCS has been invited to drop the puck at St. Ignatius College Prep’s hockey game on Jan. 15. This is the team’s first competitive hockey game after a serious school bus accident in November. On the night of the accident, St. Ignatius’s team was in Warsaw to stay at a local hotel following a game in Culver when the bus they were in was hit by a semi driver.

After the accident, several of WCS’s staff responded to the scene and brought a WCS bus to take St. Ignatius’s uninjured team members to Lutheran Kosciusko Hospital.

“It just says a lot about our community,” said Hoffert about the invitation to the game and the school district’s response to the accident. “No matter what the situation is, when there’s kids involved, they drop everything.”

Hoffert also commended the school district’s response to a power outage at Leesburg Elementary School on Jan. 10. The outage, which was due to the loss of a transmission line, affected about 5,000 Kosciusko REMC members across northeast Warsaw, Leesburg, Milford, North Webster and Syracuse.

Hoffert said a lot of WCS’s administrative staff were involved in helping get students to their parents and guardians following the outage.

“It was a huge team effort,” said Hoffert.

In other business, Chief Financial Officer April Fitterling provided the board with an update on overall fuel costs the district has seen. In 2021, WCS spent around $440,000 on fuel, while in 2022, the district spent just over $659,000. This is about an $18,000 increase per month.

Fitterling said the fuel increases are being closely monitored.

“We’re trying to implement cutting measures, not running 5 p.m. routes when we don’t need to, cutting back on our midday courtesy shuttles, and we’ve been purchasing larger buses when it comes to bus purchasing time,” said Fitterling.

Organizational and board of finance meetings were also held prior to the beginning of the work session.

For 2023, the school board officer slate includes Heather Reichenbach continuing as president, Randy Polston continuing as vice-president and Elle Turley as secretary.

In her report during the board of finance meeting, Fitterling said WCS “has been, and will continue to be, fiscally responsible and transparent.” She also noted WCS has never had any of the following: failure to make required contributions or transfers; issuance of judgment bonds; missed debt payments; missed payroll; past due vendor payments; or any findings related to the financial condition of the school corporation by the Indiana Education Employment Relations Board.

The board’s next regular meeting is at 7 p.m. Monday, Jan. 16, at the WCS central office. 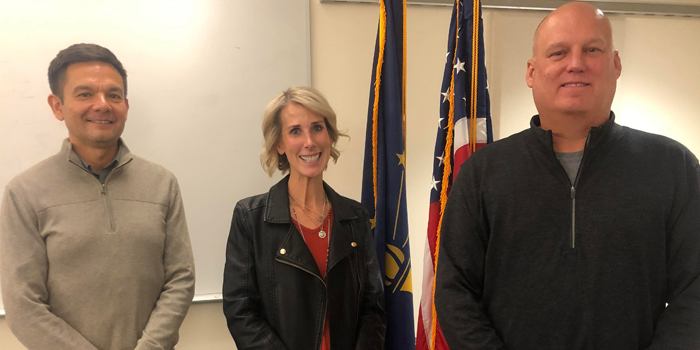 Board Member Tom Westerhof, Board President Heather Reichenbach, and Board Member Brad Johnson were all sworn in at the meeting. The board’s second new member, Denny Duncan, attended the meeting virtually.