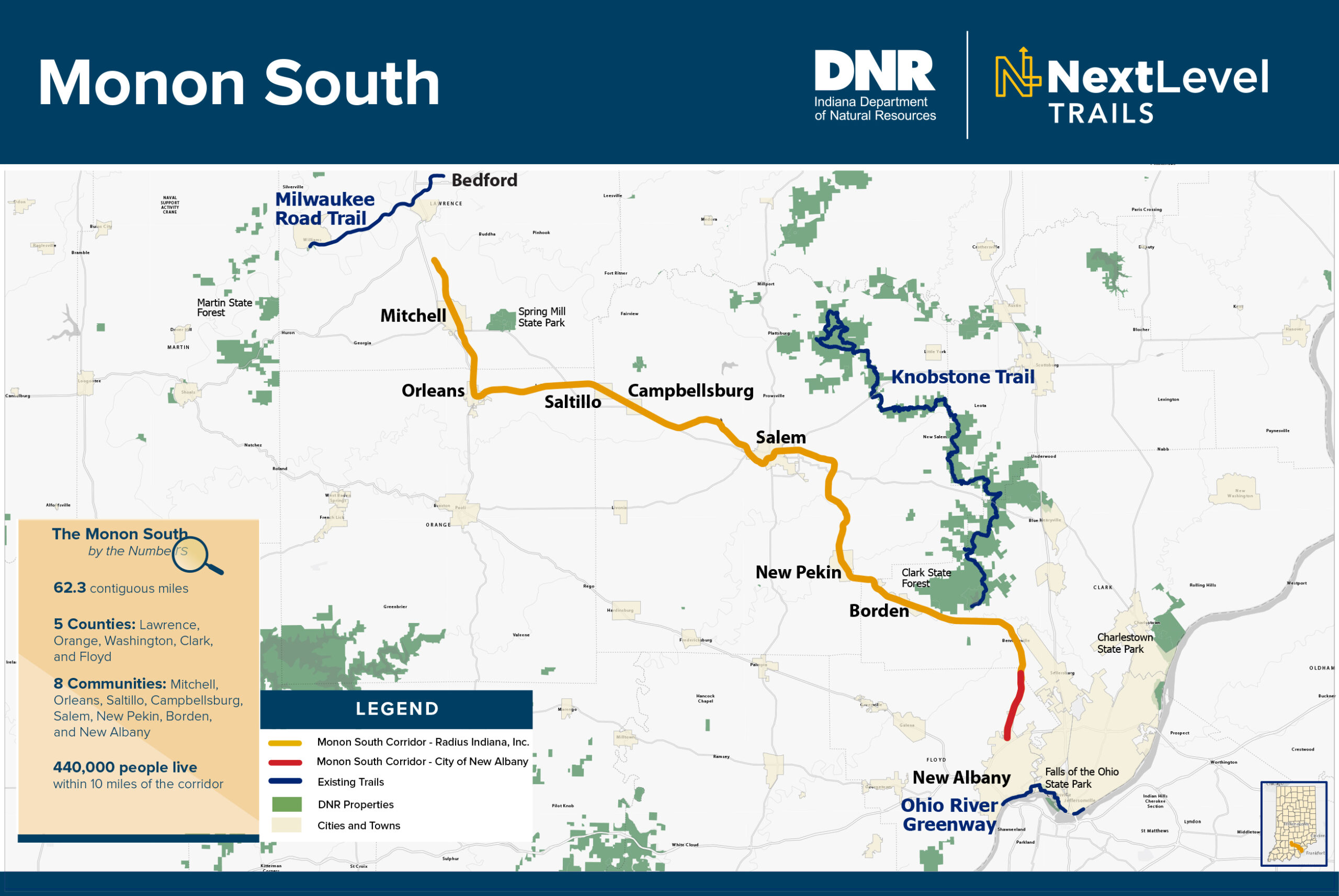 INDIANAPOLIS — Gov. Eric J. Holcomb announced Tuesday, Jan. 10, in his 2023 State of the State address that the Department of Natural Resources will award $29.5 million to acquire and begin development of the 62.3-mile Monon South Trail spanning five counties in Southern Indiana.

Once fully constructed, the trail will be the longest contiguous recreational trail in Indiana.

“Indiana is continuing to blaze new trails in conservation and outdoor recreation — and today, we’re excited to announce we’re blazing our longest trail yet, connecting communities across Southern Indiana,” said Holcomb. “The Monon South Trail will preserve a piece of our Hoosier history while promoting quality of place in our rural communities.”

The Monon South Trail will follow the route of the historic Monon Railroad beginning in New Albany and running through the communities of Borden, New Pekin, Salem, Campbellsburg, Saltillo, Orleans and Mitchell. This route includes portions of Floyd, Clark, Washington, Orange and Lawrence counties.

To jumpstart the trail’s development, the DNR will grant the partners an additional $24 million in Next Level Trails funding to begin design, engineering and construction of portions of the trail.

Approximately 440,000 people live within 10 miles of the trail’s path.

“Across the region, our community leaders see how quality of place translates to economic opportunity for our residents and our businesses,” said Jeff Quyle, president and CEO of Radius Indiana, an economic development partnership representing eight counties in Southwest Central Indiana. “Through the development of the Monon South Trail, we are transforming the historic economic engine of rail into a future-focused economic engine of a trail that will help us attract new talent and business to the state. We’re thankful for the state’s partnership and dedication to make this happen for Southern Indiana.”

“It continues to be an exciting time to live in New Albany. The new Monon South Trail brings fresh connections to our river city and for our neighbors throughout the region,” said New Albany Mayor Jeff Gahan. “When our state, regional and local partners join together, great things can happen. We appreciate Governor Holcomb, his staff and Radius Indiana for bringing this historic project home to Southern Indiana.”

The corridor follows a road survey commissioned by the Indiana Internal Improvements Act of 1836. In 1847, the Indiana General Assembly authorized a private railroad to build upon the route, and Governor James Whitcomb signed a proclamation chartering the New Albany and Salem Railroad. By 1854, the railroad was complete from New Albany to Michigan City. In 1956, the railroad officially adopted the iconic Monon Railroad name.

CSXT, a successor to the Monon Railroad, last operated trains on this section of the line in 2008 and abandoned the rail line in 2018. Under a process known as railbanking, New Albany and Radius petitioned to negotiate with CSXT to acquire the out-of-service rail corridor for use as a recreational trail.

As part of the governor’s Next Level Connections initiative, Next Level Trails is the largest infusion of trails funding in state history. The $150 million program is administered by the DNR and enables much needed trail connections within and between Hoosier communities.

“The Monon South Trail represents Indiana’s history and our future,” said DNR director Dan Bortner. “I’m thankful for our partners with the City of New Albany and Radius Indiana for helping chart this path forward for these communities across Southern Indiana.”

View progress on other Next Level Trails projects at on.IN.gov/NextLevelTrails