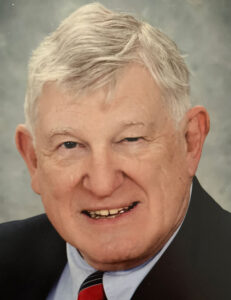 John Warren Elliott, 78, died peacefully Sunday, Jan. 8, 2023, at his home. He was born Aug. 7, 1944, in Toledo, Ohio, and was preceded in death by his father, Joseph G. Elliott, and his mother, Mildred K. Elliott. He moved to Sylvania, Ohio, and attended Sylvania High School, where he played the alto horn in the marching band. He then attended The Ohio State University as a recipient of the Charles “Chick” Evans Scholars program, where he played the alto horn for five years as a member of The Best Damn Band in the Land. After graduating from college, John moved to Winona Lake, where he actively served at the Winona Lake Bible Conferences. During these years, he met and married his beloved wife, Elaine Katherine Leinonen, who survives him.

During his career, John worked for Grace College as a purchasing agent and at First National Bank and 1st Source Bank as a vice president and trust officer. He was well-loved and respected by his clients. His contributions to the community were immeasurable. John was a longtime board member of the Warsaw Breakfast Optimist Club, Warsaw Community Development Corporation, Baker Youth Club, Warsaw Education Foundation, Western Golf Association, Goodwill Industries of Michiana, American Lung Association, Kosciusko Leadership Academy and Kosciusko County Right to Life. John also served on the Philanthropic Round Table for the Kosciusko County Community Foundation. He served as president of the Kosciusko County Convention, Recreation and Visitor Commission. In 2008, John was named Man of the Year by the Kosciusko County Chamber of Commerce. In 2020, Governor Holcomb awarded John the Sagamore of the Wabash Award, then the highest of the Governor’s awards. His other awards for his contributions to Kosciusko County are too numerous to mention. In addition to his numerous community services, John was a constant supporter of Warsaw Tigers Basketball and was a President’s Club member of Grace College Athletics. John thoroughly enjoyed actively participating in and serving on many political campaigns of Kosciusko County GOP and The Indiana Republican Party.

A Celebration of Life is planned for 4 p.m. Saturday, Jan. 14, 2023, at the Winona Heritage Room in Winona Lake. The Rev. Kurt A. Miller will be officiating.

In lieu of flowers, the family requests that donations be made to the following organizations.

1st Source Bank Wealth Advisory Services will also accept non-electronic donations for the organizations mentioned above at their local branches and will provide a donation box at the Celebration of Life service.