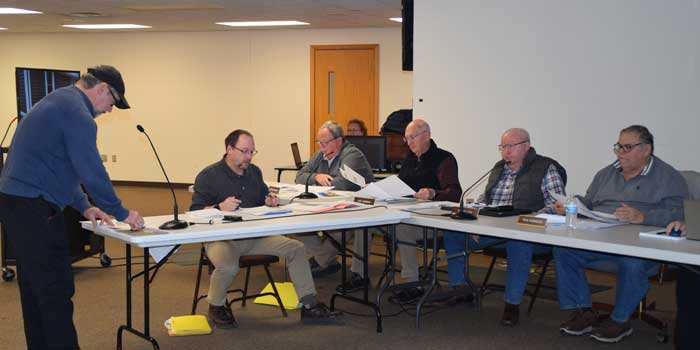 WARSAW — The Kosciusko County Board of Zoning Appeals set a tone for 2023 by holding a number of petitioners accountable during its first meeting of the year Tuesday morning, Jan. 10.

Petitioner Dan Thompson came before the board with a number of petitions for two properties he owns. In the first case, he requested a variance to allow a deck to remain as constructed 2 feet 3 inches from the side property line and allow an air conditioning unit to remain 8 feet from the right of way.

Thompson explained he purchased the property two years ago specifically for the lake view. The house itself was in terrible shape. He’s fixed the inside of the house. When it came to the deck, he stated he called the planning office twice seeking information about a permit and was told he didn’t need one.

Matt Sandy, planning commissioner and members of the BZA, speculated Thompson may have called the City of Warsaw’s planning office by mistake.

In his next hearing, Thompson removed a mobile trailer from another property and was seeking a variance to put an oversized accessory building and garage in its place. After reviewing his exhibits and asking a few questions, the board approved his request with a revised set back of 10 feet rather than the 5 feet Thompson was requesting.

Both of Thompson’s properties are in Seward Township.

Leonard Morseau asked the board for a variance to allow a mobile home to remain as placed without permits 6 feet from the road right of way and 15 feet from the rear property line. The trailer is located on a property in Tippecanoe Township.

Morseau told the board he has always rented and didn’t know he needed permits to place a trailer. In addition to being illegally placed, the trailer was placed on an existing septic system. Sandy told the board the Kosciusko County Health Department believes a new septic system needs to be installed. The property owner, Carl Stiver, was a bit exasperated over the issue, telling the board the septic system was installed sometime between 1998 and 2000 and he doesn’t understand why it needs to be replaced.

After some consideration the board denied the petition, giving Morseau until April 1 to remove the trailer. If Stiver can get the septic replaced, or fixed if needed, and they can find a trailer that will fit on the lot, the board will revisit the issue.

A request by Janet Homan to change a nonconforming tract of ground to 24 feet of right of way when the ordinance requires 50 feet was denied, with BZA member Randy Cox noting the board had an opportunity to fix a mistake that was made decades ago. The board is requiring 50 feet of right of way for the change. Homan’s property is located in Harrison Township.

The board did approve the following petitions:

• A request from Steve Coats for a variance to construct a second story over an existing garage 3.5 feet from the side property line in Tippecanoe Township..

• A request from James Beagle to put a lakeward balcony on second story living quarters. Approval is based on approval by the Indiana Department of Natural Resources, which is involved because the balcony will be over water. The property is located in Turkey Creek Township.

• A request from Murzin Vladimir for an exception to allow the placement of a new residence and attached garage to replace similar structures destroyed by fire. The property is located in Harrison Township.

The board continued the case of Calvin Bontrager, who did not show up for his hearing, and Edd Allen, whose case was continued by the Kosciusko County Area Plan Commission.