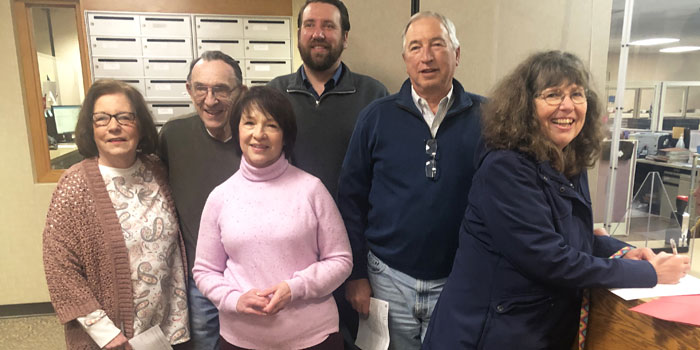 Five of the Warsaw Common Council members and Clerk-Treasurer Lynne Christiansen filed for reelection Wednesday morning, the first day of filing for the 2023 city and town primary elections. In front, from left, are Christiansen and Diane Quance. In back are Cindy Dobbins, Jerry Frush, Josh Finch and Mike Klondaris. Photo by David Slone, Times-Union.

KOSCIUSKO COUNTY — Filing began Wednesday morning, Jan. 4, for the upcoming primary for Syracuse, Warsaw and Winona Lake, as well as for the general election for smaller towns.

Filing for the primary election for Syracuse, Warsaw and Winona Lake began Wednesday and will end at noon Friday, Feb. 3, for Republican and Democrat candidates.

Additionally Lynne Christiansen, clerk-treasurer, who was elected by caucus in 2010, is seeking a fifth term.

Three council members and the clerk-treasurer for Syracuse have indicated they will be seeking reelection. Cindy Kaiser, appointed by caucus in 2021, is expected to file for the District 3 seat; Larry Martindale, District 4, is expected to file for his third term; and Bill Musser, District 5, has stated he will file for his 10th term. Virginia Cazier, who was appointed clerk-treasurer in 2020, will be seeking her first term. 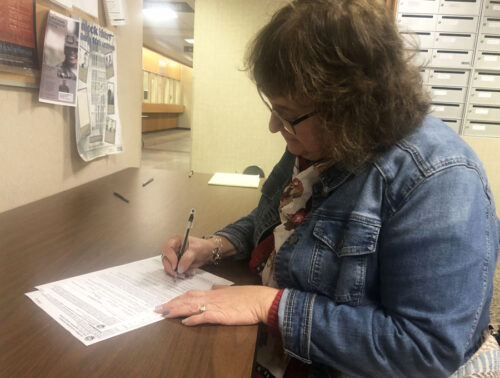 Winona Lake Clerk-Treasurer Laurie Renier was the first person to file this morning at the county clerk’s office for the 2023 city and town elections. Photo by David Slone, Times Union

Candidate filing also began for towns not holding a primary. Filing for those candidates will end at noon, Aug. 1.

All elected officials in Etna Green will be filing for reelection. Those seats are currently held by Keith Claassen, Jason Hanes and Susan Klinefelter on the council and Patti Cook, clerk-treasurer.

Clerk-Treasurer Amanda Yaprak, who was elected by caucus, is seeking her first term. Council members Shelly Krueger and Tim Croy will seek reelection. Jill Gross, council member, has not made a decision.

Myra Mast, clerk-treasurer, will be seeking her second term; and Matt Brubaker, councilman, will seek reelection for his third term. Janet Castle, who was appointed to the town council in December 2022, is unsure about seeking her first elected term. Tom Barker has served a total of 5 1/2 terms, and is not running at this point.

Clerk-treasurers and council members for Claypool, Leesburg, Sidney and Silver Lake have not made any announcements.