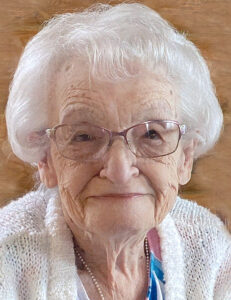 Born Aug. 14, 1931, in Swan Township, Noble County, she was the firstborn of nine children of the late Kenneth R. and Wilma A. (Scheurich) Berkes. Growing up in Noble County, she attended Avilla and Merriam elementary schools and graduated from Wolf Lake High School in 1950.

She was a member of Ormas Baptist Church for over 71 years, the Ormas Missionary Society and the Washington Township Homemakers Club. She enjoyed spending time with family and friends, especially over a game of euchre or other card game.

The funeral service is at noon Wednesday, Dec. 28, at Smith & Sons Funeral Home, Columbia City. Burial is at the Thorn Cemetery. Visitation is from 10 a.m. until the service, Wednesday, at the funeral home.

Memorials are to Ormas Baptist Church.