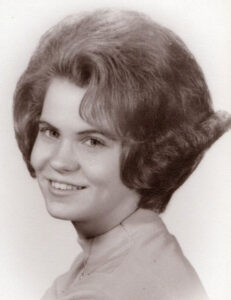 She was born April 9, 2022, in Hixson, Tenn. Judy, as many knew her, was the daughter of Melvin Hixson and Burma (Whitlow) Black. She spent her formative years and much of her adult life around Hamilton County, Tenn., and Kosciusko County, settling in the Leesburg/North Webster area in 1990.

A hard worker, Judy worked in several factories and retail establishments but had been retired for some time. She enjoyed flower and vegetable gardening, often canning the fruits of her labor — her family remembers her salsa the most! She liked crafting, crocheting and making home decor items. She enjoyed classic TV shows and had a heart for animals, especially dogs.

Those who survive include three children, daughters, Angie and Tabitha and son, Eric; three grandsons, Cody, Robert and James; five great-grandchildren, Neliel, Jesse, Cecily, Paisley and Robert; and a brother, Terry. She was preceded in death by her first husband, Gary Dietz; her parents; and a brother, Bobbi.

Titus Funeral Home of Syracuse is entrusted with Judy’s care. The family is grieving privately, and no services are planned at this time. Those wishing to express their sympathy may leave written condolences at www.TitusFuneralHome.com. Memorial gifts are appreciated and may be directed to the Animal Welfare League of Kosciusko County, PO Box 1906, Warsaw, IN 46581.