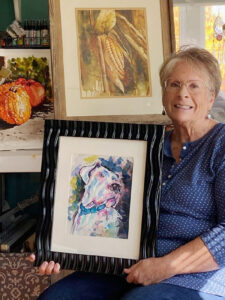 Judy Wagner, North Webster, sits in front of her watercolor paintings at her home studio. She is holding the picture she painted of her daughter’s Great Dane, Chief. Photo provided by Judy Wagner

NORTH WEBSTER — “I’ve been drawing since I was a little kid,” stated Judy Wagner, North Webster. “It runs in the family, I guess.

Wagner sees the same creative gifts in her children and three grandsons. “I have four great-grandchildren and when they visit, I let them paint. Right now, it’s more messy than artistic. But I think it’s important to let them develop those creative gifts I believe everyone has in one form or another.”

Wagner took art classes all through school. “I got a scholarship to Fort Wayne Art Institute, but the responsibilities of life made it impossible for me to take classes at that particular time.”

Wagner has taken watercolor lessons from a couple local artists, one being Terry Armstrong of Warsaw. “I’ve learned a lot from him. His painting is very realistic and detailed. I tend to paint very loose, fast and splashy with lots of colors. It’s been good to learn other artists’ techniques and implement those into my paintings. Learning to slow down and take my time has been challenging.”

Wagner used to paint in acrylics in years past. “I enjoyed that medium because I could just slap some colors on a canvas and create a picture as it developed. If I made a mistake, I could just paint over it.”

She has discovered that watercolor, on the other hand, is not so forgiving. “I usually try to have in mind the final painting before I start. I generally use photographs as reference material for a starting point. Since watercolor has a mind of its own, my paintings always end up different than I thought. Sometimes good. Other times they end up in my closet pile, to possibly pull out later and rework.”

Her most recent project from an Armstrong watercolor class was pumpkins in front of a barn door that she’s still working on, adding a few more details. She also just finished a watercolor of her daughter’s Great Dane, Chief, that had to be put down a few months ago.

Wagner is more of an informal instructor. She prefers to teach people one on one in her apartment studio on the top floor. “I taught a young lady to paint on the spur of the moment. We worked side by side while I instructed her. One of my favorite pupils has been my great-grandson. I’ll put a smock on him and let him paint. Then I instruct him on how to clean up and store his brushes.”

She remarked, “I believe art is in the eyes of the beholder. Not everyone will like everything I create. Sometimes it might be just a certain color or perhaps the subject matter that evokes a good memory or emotion.”

Wagner believes everyone has a bit of artistic ability. “I think we are all creative in one way or another. We don’t necessarily have to be able to paint, but we all have the ability to create something.”