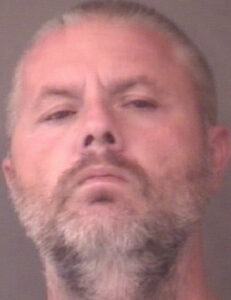 ETNA GREEN — An Etna Green man was arrested after allegedly crashing his vehicle into a house and battering a woman.

In the first case, Shane L. Miller, 40, 129 N. Etna St. Lot 49, Etna Green, is charged with operating a vehicle as a habitual traffic violator, a level 5 felony; and failure to stop after a vehicle accident, a class B misdemeanor.

On June 23, a Kosciusko County Sheriff’s Office deputy went to a residence in Etna Green regarding an alleged domestic battery incident, which was later recanted by the reporting party. A woman said Miller battered her and crashed his vehicle into a nearby home while trying to leave.

According to court documents, after the incident, Miller got into a vehicle and backed out of a driveway at a high rate of speed, hitting the corner of a home. The vehicle was stuck on the residence’s deck when the deputy arrived. Miller then had a verbal argument with the residence’s homeowner and left the accident scene.

Upon further investigation, the deputy learned Miller was a habitual traffic violator, with a lifetime license suspension beginning in 2015.

On July 2, the deputy was on patrol in Etna Green when he saw Miller and spoke with him about the June incident. Miller denied driving his vehicle into a residence and said the woman was driving. The residence’s homeowner said it was Miller who was driving.

On Nov. 10, KCSO deputies responded to a domestic battery report at a residence. Upon approaching the area, the deputies could hear a man yelling and saw a woman and three children in the home. The woman said Miller smacked her face several times. Deputies noticed the woman had a large red area on her left cheek.

One of the children said Miller hit the woman.

While taking Miller into custody, deputies found a glass pipe and a syringe on Miller’s person. Deputies also found 5.1 grams of fentanyl, a narcotic drug, in the residence.

Miller was booked in the Kosciusko County Jail on both of these cases on Nov. 10.