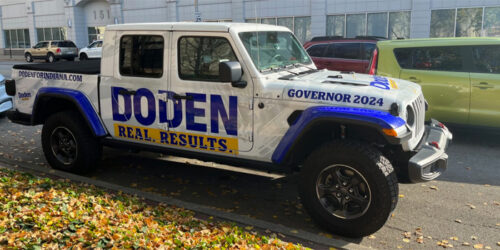 Eric Doden, a Fort Wayne businessman, is the only one who has announced his bid for governor as a 2024 candidate. Photo by Whitney Downard/Indiana Capital Chronicle.

INDIANAPOLIS – Eric Doden, a 2024 candidate for governor of Indiana, has launched an ad campaign just over a week after the midterm election.

The move comes just before U.S. Sen. Mike Braun is expected to announce his decision on whether to run for governor. Several media reports have indicated it could come any day now. 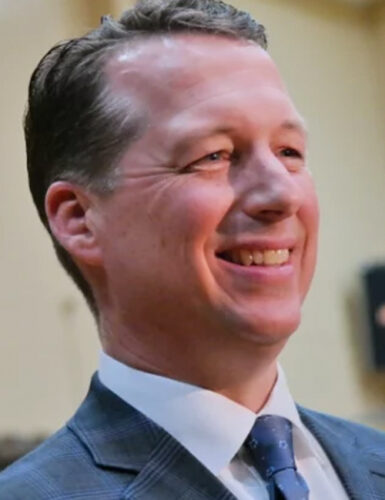 Doden, a Fort Wayne businessman, announced his campaign in May 2021 and said he’d raised $5 million so far while visiting 46 of Indiana’s 92 counties.

“The election results last week made one thing very clear: voters across the country are demanding strong, bold and courageous leadership focused on results, not empty rhetoric,” Doden said in a release. “While Hoosier families are hurting as a result of the failed “leadership” in Washington D.C., we have proposed a bold plan to tackle Indiana’s economic challenges, improve our healthcare system, restore community pride in cities large and small, invest in our teachers and protect our most vulnerable. As Governor, we will keep and make Indiana more safe, prosperous, and competitive.”

A long list of Republicans are said to be interested in addition to Braun, including Lt. Gov. Suzanne Crouch, Indiana Attorney General Todd Rokita and U.S. Rep. Trey Hollingsworth.

Doden’s “Results” ad campaign highlights Doden’s platform of protecting the vulnerable “at all stages of life,” defending 2nd Amendment rights, protecting law and order by putting “the interests of Main Street ahead of Wall Street.” During the ad, he drives around in a large Jeep Rubicon and Fort Wayne is featured heavily in the background.

“We will show Washington D.C. what strong leadership looks like and as your governor, I will never compromise what has made Indiana and America great,” Doden says in the advertisement.

Doden and his wife, Maci, live in Fort Wayne with their five children. He previously served as the president of the Indiana Economic Development Corporation under former Gov. Mike Pence.