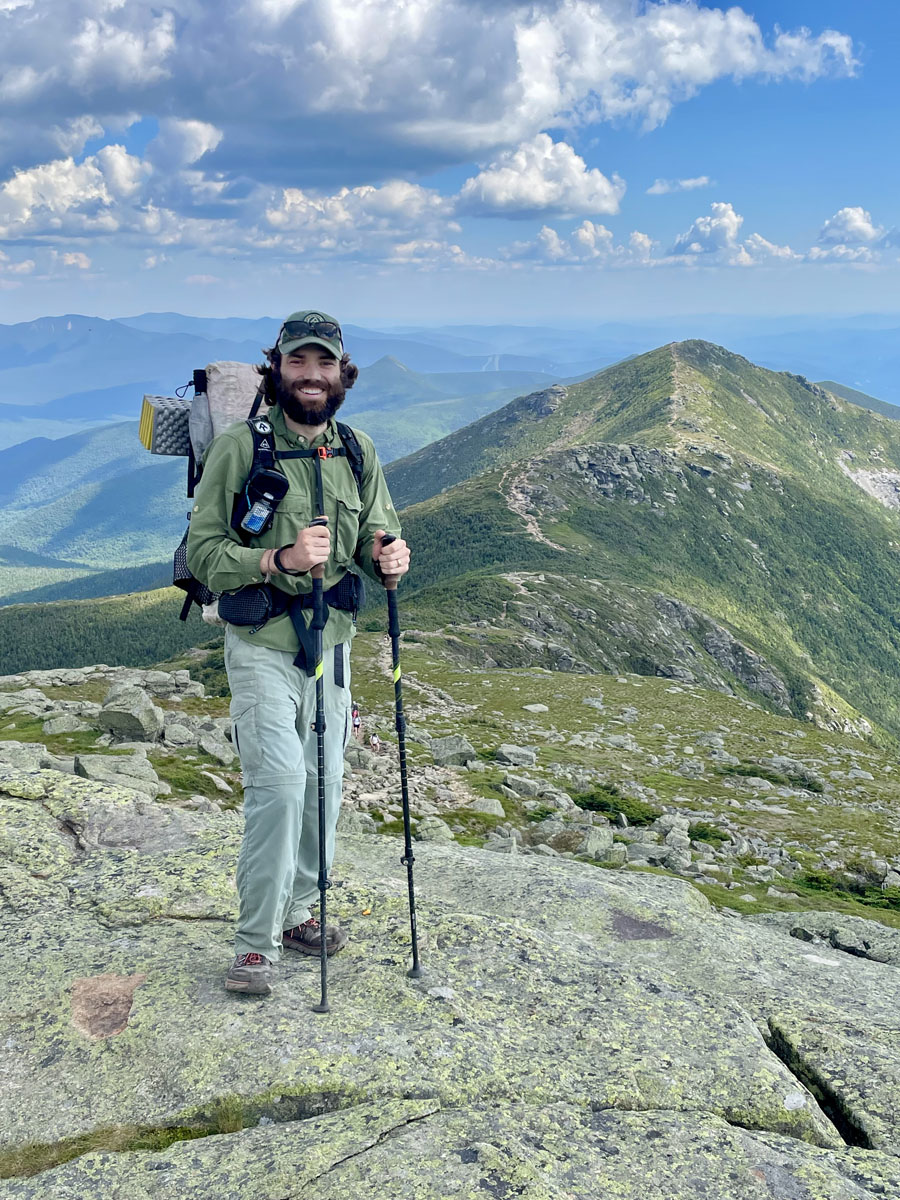 Before moving to Rochester to start work as the new dentist at Implant & Cosmetic Dentistry of Northern Indiana in October, Ian Barnard fulfilled his lifelong dream of hiking the length of the Appalachian Trail, which stretches 2,200 miles through 14 states. Photo by Angela Barnard.

ROCHESTER — For Ian Barnard, 2022 was an eventful, life-changing year. In October, he began work as the new dentist at Implant & Cosmetic Dentistry of Northern Indiana in Rochester, moving with his wife Angela from his previous job in South Carolina.

That in itself is a big change for anyone; however, before settling in to his new position, Barnard fulfilled a lifelong dream of completing a thru-hike of the Appalachian Trail, a 2,200-mile odyssey running south to north through 14 states.

Barnard was born and raised in Kendallville, where his father was a veterinarian for 42 years. “I grew up in the medical sector,” he reflected. “I knew I wanted to work in health care. I’ve always enjoyed working with people.”

After attending Purdue University and completing dental school in 2016, Barnard worked in Ohio and South Carolina before returning to Indiana. “It was time to move back, to be closer to family and put down roots.”

It was Barnard’s father who first planted the seed of hiking the Appalachian Trail. He had hiked 400 miles of route as a teenager in the 1970s, and he joined Ian for one week every month of the journey, providing crucial support along with Angela, who also hiked parts of the trail and helped keep Ian supplied. Angela, a journalist, worked remotely from nearby towns and managed to complete around 500 miles of the trail, hiking with Ian in every state.

“She supported me on and off the trail,” said Barnard. “She put her life on hold to help me with my dream. … It was definitely a team effort. I couldn’t have done it without them.”

To keep his weight as low as possible, Barnard and his family planned to resupply him every four to seven days. “It’s a logistical thing, figuring mail drops.”

The hike started in March at the southern terminus, Mt. Springer in Georgia, and ended at Mt. Katahdin in Maine. The “A.T.” is believed to be the longest hiking-only trail in the world and encompasses all difficulties, from easy hiking through rolling valleys to strenuous — and dangerous — sections, which are as much rock climbing as walking. Barnard traversed some of the wildest, most beautiful parts of the United States.

“I saw a lot of wildlife, … porcupine, rattlesnakes, bear, moose, anything you can imagine.” He counts encounters with moose and rattlesnakes as the most “intimidating,” and recalled hearing the rattling of the snakes continuing for a half-mile behind him.

Thru-hikers experience “every extreme,” said Barnard, “coldest, hottest, thirstiest …” And may travel for days without seeing another person.

He went through four pairs of shoes, but every piece of gear was important, as illustrated when he lost the cap to his water bottle, a “simple piece of plastic.” (On a related note, Barnard, who also employed a water filter, found that “water tastes best in the pine forests.”)

One of his favorite sections was also one of the most treacherous, in the White Mountains of New Hampshire. Although it was July, he said, “there was still snow under the rocks.” Still, he was enchanted by the views he said were “like a scene from Narnia.”

Such conditions strip away many of the trappings of the workaday world, including status. Barnard described “the great equalizer on the trail. … You find the commonalities with other hikers.” Along the way he met people from “every walk of life” and enjoyed the “positive, upbeat” attitude they shared.

Barnard averaged 20-25 miles per day, but some days, especially in the north on particularly rocky terrain, he traveled as little as 10.

“It’s mind over matter,” he explained. The scope of the hike is broken down into simply “putting one foot in front of the other every day, until the next day you look up and you’re almost there.”

Somehow, in the middle of the expedition, the Barnards took a weekend off to move into their new house in Rochester. “Two days later I was back on the trail,” Ian recalled.

Angela started and finished the hike with Ian, joining him for the summit of Mt. Katahdin. “It was emotional, really special.”

Now that he is settled in, Barnard and Angela are “excited to make new memories in Rochester.” He described the staff at Implant & Cosmetic Dentistry as “phenomenal, super-professional,” and he looks forward to providing the “perfect patient experience … taking the time to talk with patients to make sure our goals are in alignment.” 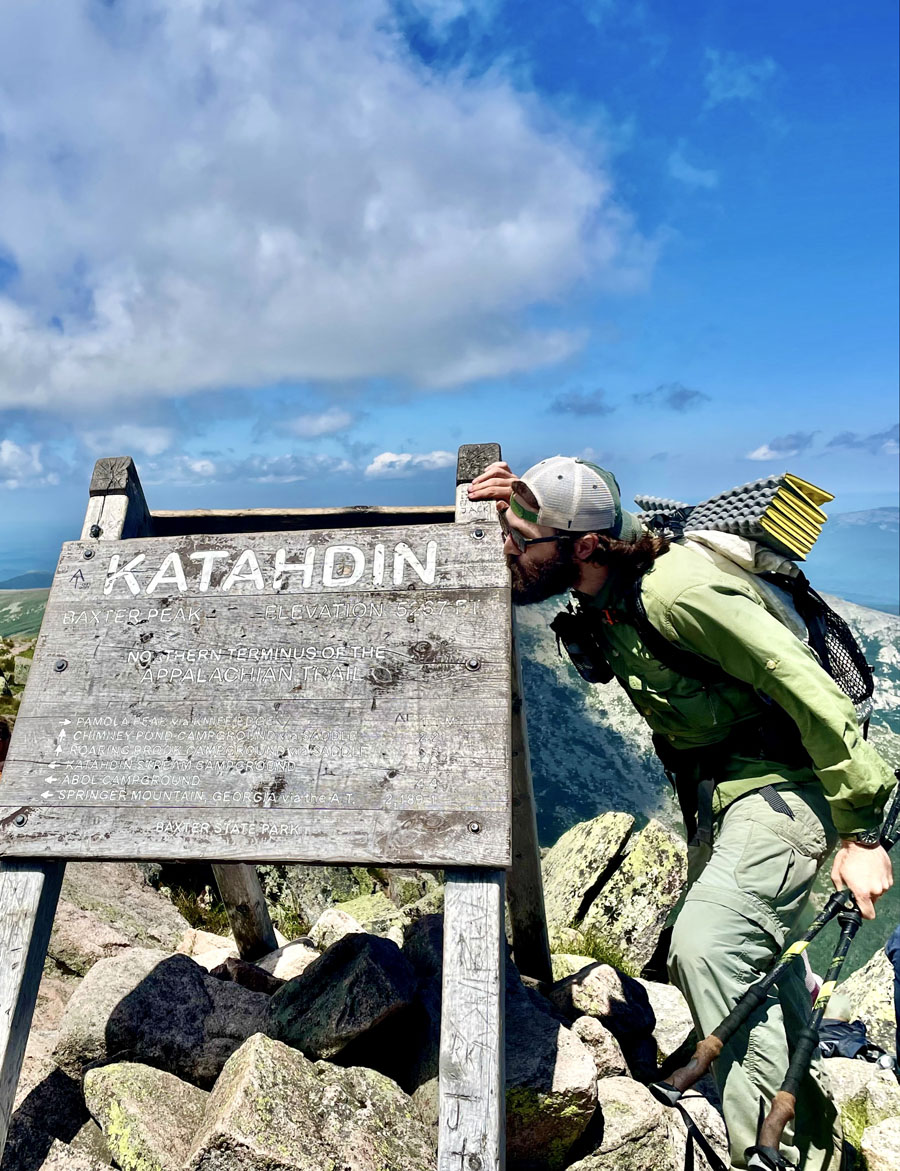 After starting the hike in March 2022 at the southern terminus, Mt. Springer in Georgia, Barnard reached the northern terminus on Mt. Katahdin in Maine in August. His only “break” came halfway through, when he and his wife Angela, moved into their new home in Rochester. Two days later he was back on the trail. Photo by Angela Barnard.