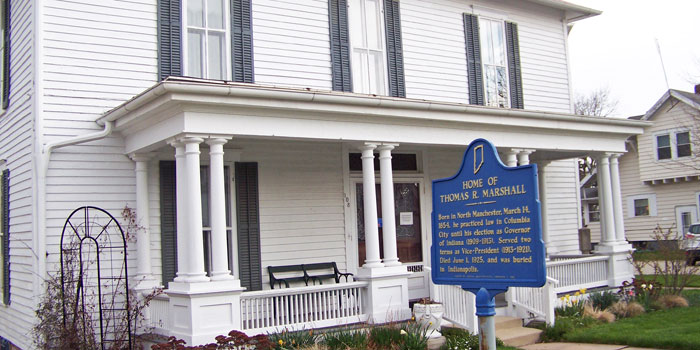 The home of the 28th vice president of the United States, Thomas Marshall, is part of the Whitley County Historical Society Museum in downtown Columbia City. The museum highlights the life of the vice president, the history of Whitley County and its people. Free tours are available. Photos by Rod King.

The 27th governor of Indiana, Thomas Marshall of Columbia City, who was well known for his humorous asides, once quipped, “There were once two brothers. One went to sea and one became the 28th vice president of the United States. Neither of them were ever heard of again.” He was also credited with saying, “What this country needs is a good five-cent cigar.” 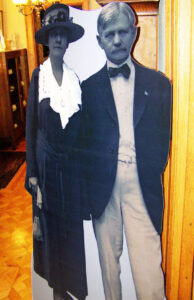 Thomas Marshall and his wife, Lois, didn’t serve alcoholic beverages at their parties in Washington, so most guests made an obligatory appearance and left quickly.

Marshall’s popularity as governor, and the fact that Indiana was a critical swing state, helped him secure the Democratic vice presidential nomination on the Woodrow Wilson ticket in 1912.

Under Wilson, as it turned out, he became the forgotten man in the government. A major ideological rift developed between the two in their first term, leading Wilson to limit Marshall’s influence in the administration. Marshall’s sense of humor rubbed the president the wrong way so he had his office moved out of the White House. This quote made by Marshall in his vice presidential acceptance speech when he promised to “acknowledge the insignificance of the office,” and another quip saying, “I was the Wilson Administration spare tire … to be used in case of emergency,” infuriated the president.

After Wilson suffered a debilitating stroke, Marshall was kept in the dark while Mrs. Wilson essentially ran the government. With Wilson unable to function, Marshall faced a huge decision because in 1918 there was no procedure for the vice president to step into the presidency. Fearing he would open up a constitutional crisis, he decided not to become president.

Scholars are still debating whether or not he made the right choice, but for Marshall, putting the Constitution ahead of his own agenda made perfect sense. It was not until 1967 that the 25th Amendment established a process for transfer of power if the president was not able to continue to serve.

In addition to the controversy over accepting the presidency or not, Marshall has a couple of firsts to his credit. He was the first vice president to hold cabinet meetings, which he did while Wilson was in Europe. He’s also the only vice president to have been the target of an assassination attempt while in office. 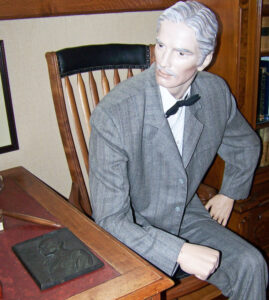 Marshall was one of six vice presidents from the Hoosier state. He, Dan Quayle and Mike Pence were born in the state. Also from Indiana but born elsewhere were Schuyler Colfax, Thomas Hendricks and Charles Fairbanks. Indiana is second behind New York, which produced 11 vice presidents.

Marshall was a prohibitionist. Most guests at his parties made an obligatory appearance and left quickly because no alcoholic drinks were served.

His modest, two-story Italianate home in downtown Columbia City is part of the county historical museum that focuses on his life, the history of Whitley County and its people.

Between 30% and 40% of the furnishings were originally owned by the Marshalls. The house, which was built in 1864, was purchased in 1958 by the Whitley County Historical Society and it took several years to rehabilitate it. He was born in North Manchester, practiced law in Columbia City and is buried in Indianapolis. 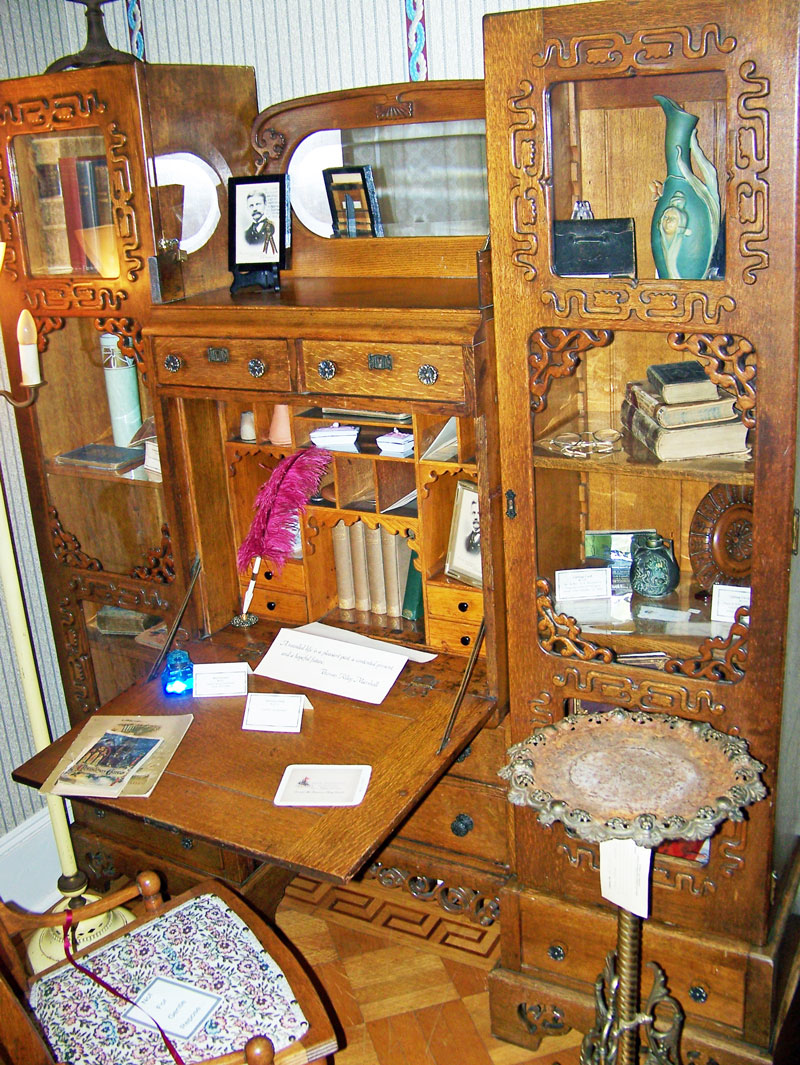 Between 30% and 40% of the furnishings in the home were originally owned by the Marshalls. The house, which was built in 1864, was purchased in 1958 by the Whitley County Historical Society. It took many years to rehabilitate because it had been used as an apartment house. Several rooms upstairs feature famous Whitley County people.