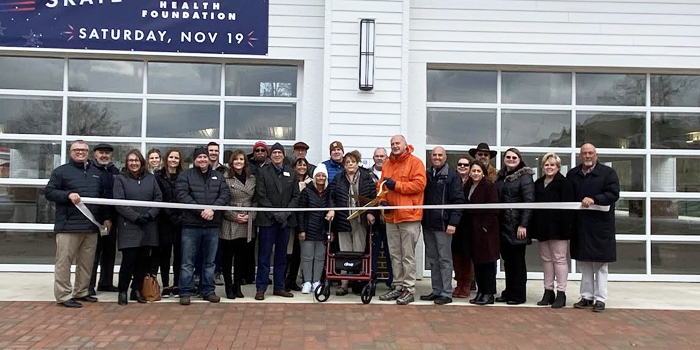 The K21 Health Foundation hosted a ribbon-cutting for Miller Sunset Pavilion, 705 Park Ave., Winona Lake, on Wednesday, Nov. 16, ahead of the pavilion’s grand opening on Saturday, Nov. 19. Shown, those who helped bring the pavilion about, including the Winona Lake Town Council and Town Manager Craig Allebach, Mary Louise Miller and K21 Health Foundation representatives, pose for a photo. InkFreeNews photos by Leah Sander.

WINONA LAKE — The dreams of many for an ice rink in Kosciusko County have come true with the completion of the Miller Sunset Pavilion.

On Wednesday, Nov. 16, the K21 Health Foundation hosted a ribbon-cutting for the pavilion, located at 705 Park Ave., in Winona Lake.

That preceded the pavilion’s grand opening, which is set for Saturday, Nov. 19. K21 is sponsoring free skating at the pavilion’s rink from noon to 8 p.m. that day, also the date of The Village at Winona’s tree lighting and Christmas activities.

K21 is also paying for skate rentals Saturday, and skaters can also get coupons for cookies and hot chocolate.

Before the ribbon-cutting Wednesday, several people involved with the project spoke.

One of those was K21 President and CEO Rich Haddad. K21 gave $1.5 million to build the pavilion, having offered funds to any town in the county who wished to put in a rink.

“This has been a long time coming, and it’s really exciting to see this actually happen and we’re ready for the ice this weekend,” said Haddad.

“All kudos to the town of Winona Lake for having the commitment and vision to bring this to our community,” he said.

Haddad then asked the Kosciusko Leadership Academy’s Allyn Decker to speak, noting that “one of the things this reality took is for people to keep planning, keep visioning and keep moving us forward to this project.”

People who have gone through KLA over the years, known as cadets, had talked about creating an ice rink locally through their end of the year projects or “White Paper Projects.”

“This ice rink took four White Paper Projects, for it to finally come to fruition,” said Decker. “Many thanks to (the cadets who suggested the rink) and thanks to the K21 Health Foundation and the town of Winona for making it happen.”

Haddad next had The Village at Winona Managing Director Nick Hauck speak. He helped oversee the pavilion as it was being built.

“This is really a blood, sweat and tears project for Nick,” said Haddad. “He’s not going to keep track of the number of hundreds and hundreds and hundreds of extra hours he has put in to making this possible, but I know this thing wouldn’t have happened without Nick having a clear direction here, being given the blessing from the directors of The Village at Winona to put in all the extra time and working in partnership with the town.”

“So, Nick, I just want to take a moment and just let you know how thankful we are as a community that this is something you decided to personally help drive and make a reality, so thank you,” said Haddad.

Hauck noted the project had been in a way in the works for 26 years, since 1996 is when the first group of KLA cadets suggested having a rink.

“It truly is a dream to fulfill that time commitment that all those people made throughout that time,” said Hauck.

“Jan. 13, 2019, is when we first (formally) started talking about this, so going back to again … we were able to do this in a little under four years from the beginning talks to where we are now, so it’s pretty amazing,” he said.

Earlier, Haddad had said that Goshen had formally started planning an ice rink in 2017 and still hadn’t broken ground for it yet.

“I just want to thank Mary Louise Miller and everything that she’s donated,” said Hauck, adding that Winona Lake wouldn’t be in the state it’s in today without her and her late husband Dane Miller.

“So to have this great facility that we have now in conjunction with The Village at Winona and town of Winona Lake, it truly is amazing what 20 years have done in our community,” said Hauck.

Mary Louise Miller gave both money and land to build the pavilion.

Haddad then had Winona Lake Town Manager Craig Allebach speak, calling Winona Lake “the town who decided to dream big and think big and pull off all the creative ways of making this possible.”

“This is their facility, and we are excited that they have chosen to invest in our greater community by committing to a place like this that really has 12-month, year-round asset in value to our community,” said Haddad. “I’m really excited about all the things this facility will (make) possible. Of course, we’re most excited about the ice skating.”

He thanked Allebach and the town council for their involvement.

“The county’s been waiting for this for a long time,” said Allebach. “And thanks to the persistence of the community and to those involved in those KLA projects that created that vision, it came to be.”

He noted that the idea of an ice rink was brought to the town’s attention while Winona Lake was working on a comprehensive plan.

“We were really working on it beforehand, but when K21 … said we’re going to put (money) out there (for any town in the county that wanted a rink), we were all in and so ultimately, we applied for a grant through the K21 Health Foundation for $1.5 million and then we were off and running,” said Allebach. “I want to thank you (K21) … for your contribution not only in this project, but in a lot of projects in Winona Lake because without a lot of that seed money, all it takes is that one person, that one foundation … to put it out there and then boom, it just takes off.”

“So Nick and I worked to create a further partnership between (WL Ice LLC) and Mary Louise Miller to help build (the pavilion),” added Allebach.

The pavilion was created via the build-operate-transfer process, mentioned Allebach. BOT allows a developer to essentially complete a project and later shift ownership to a government entity, in this case WL Ice LLC to Winona Lake.

“I especially want to thank Nick again and The Village and … Dane and Mary Louise Miller and of course, not only for this, but for what they’ve done for us for the last three decades,” said Allebach. “They’ve really poured into this community, and I also want to thank the Winona Lake Town Council because they kind of caught that vision, they created the comprehensive plan and we put it into play.”

He also thanked local company, Robinson Construction. It built the pavilion, and Jim Malcolm was the architect.

“There’s a reason this is the Miller Sunset Pavilion, Dane and Mary Louise Miller (had a) clear vision … for the future of Winona Lake and they’ve invested so much in making Winona Lake and The Village what it is today and in this particular project, this was her property that she’s donated to make this possible and (WL Ice) is her ability to (make) the development, the construction and the financing of this possible for the town to then take this forward,” he said.

Hauck added thanks to others involved in the project, including G&G Hauling & Excavating.

Haddad also thanked “the past and present board of K21” for agreeing to put funding out for the project.

Regular hours for the rink will be 4-8 p.m. Tuesday through Friday, noon to 9 p.m. Saturday and 1-5 p.m. Sunday. Costs for skate rental, regular admission and group rates may be found by clicking here. There will also be concessions for sale at the rink.

Allebach mentioned later to InkFreeNews that people may email any questions to [email protected] regarding having events at the pavilion or inquiring about employment there.

Haddad noted to InkFreeNews that the pavilion is not only for those in the Winona Lake area.

“It’s the community at large, it’s the county and really Northern Indiana that get an asset that I think people will enjoy,” he said. “The impact this is going to make is ripples into our region, which is really exciting, that people I think will come from other communities to enjoy ice skating and other things from this facility.” 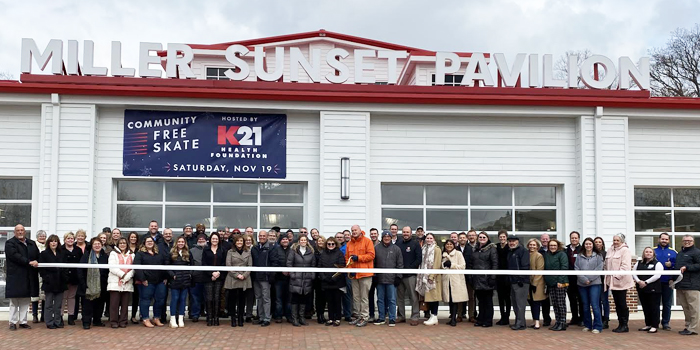 More people pose for a photo at the ribbon-cutting. 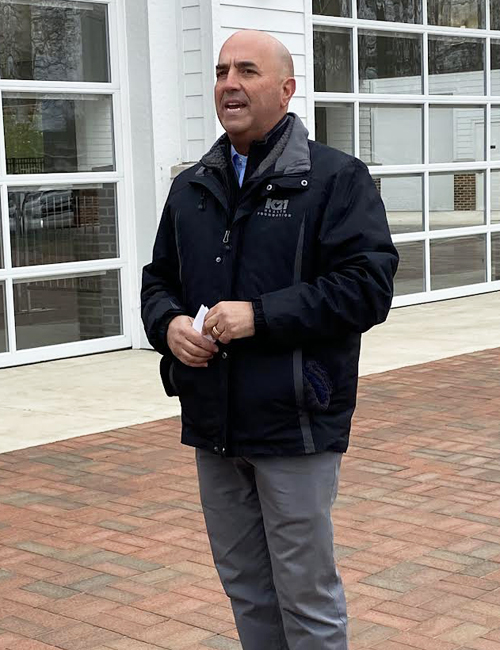 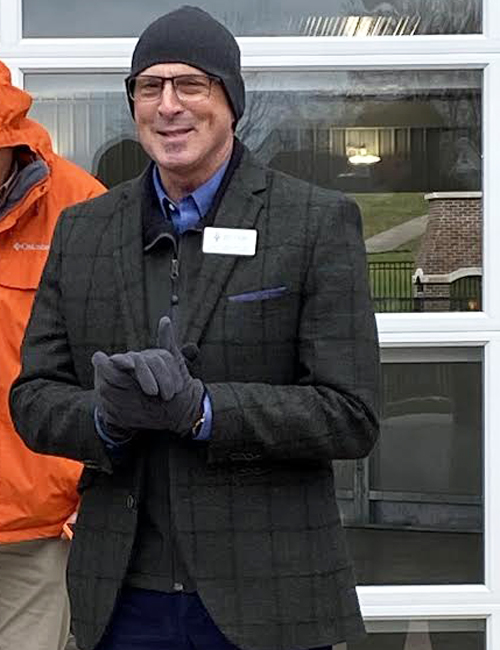 The Kosciusko Leadership Academy’s Allyn Decker talks at the ribbon-cutting. 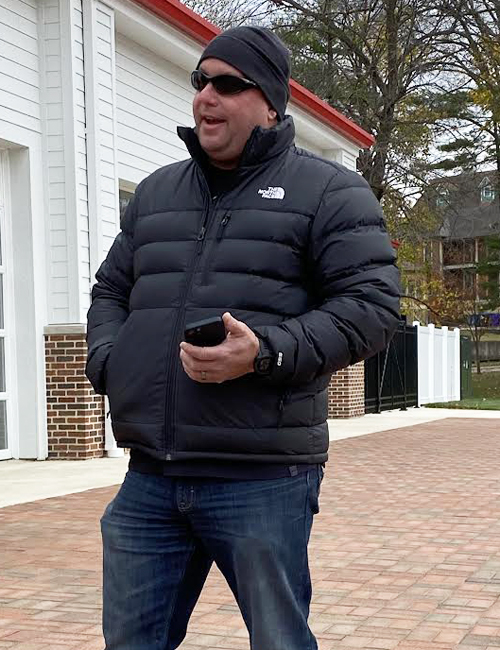 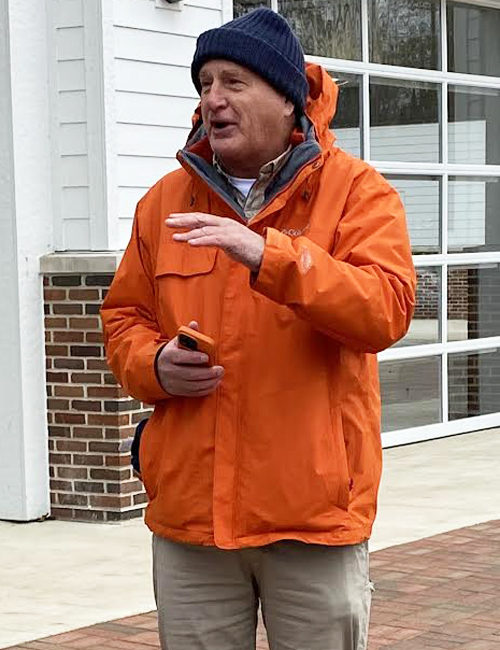 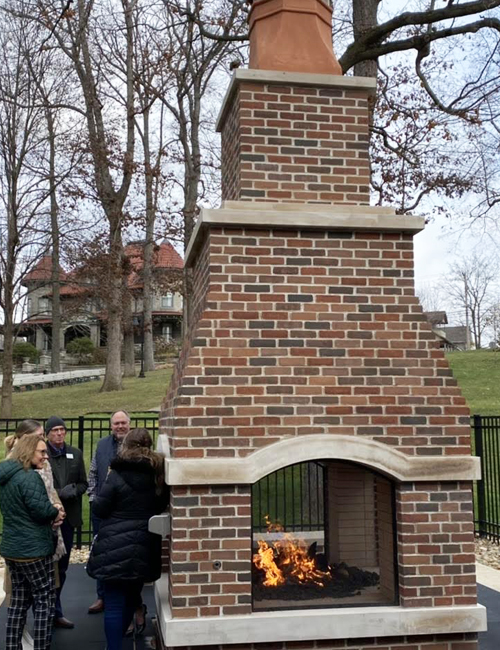 Some attendees enjoy the pavilion’s fireplace. 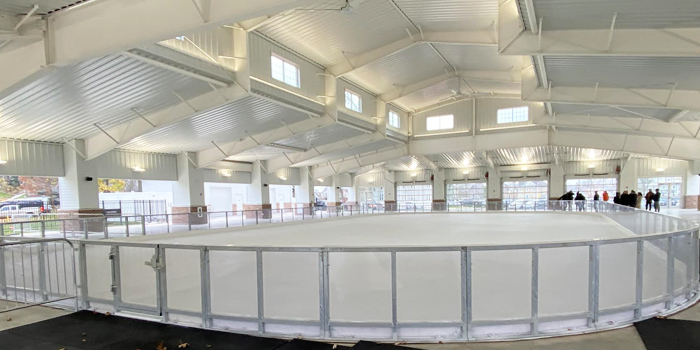 A look at the pavilion’s ice rink. 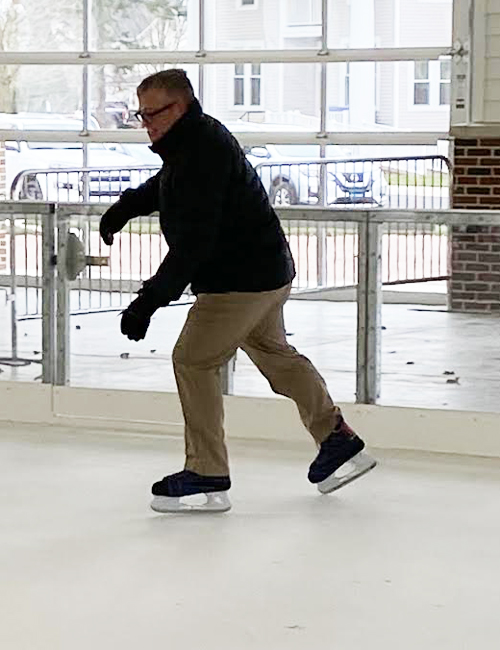 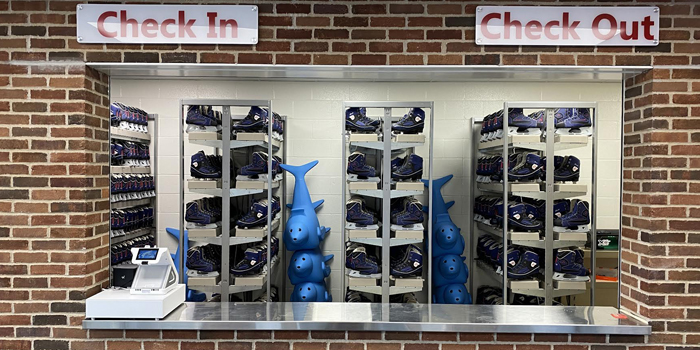 A view of the skate rental area. 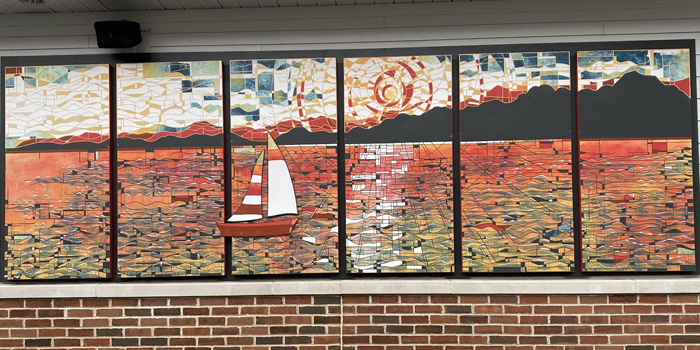 This art piece hanging on the side of one of the pavilion’s outbuildings was done by local artist and Wawasee Community School Corp. teacher Christi Ziebarth and her students. It’s meant to depict the late Dane Miller’s boat the Antithesis sailing on Winona Lake with a sunset. The pavilion gets its name from a reference to Miller not wanting to just sail off into the sunset in life, but continuing to help other people.