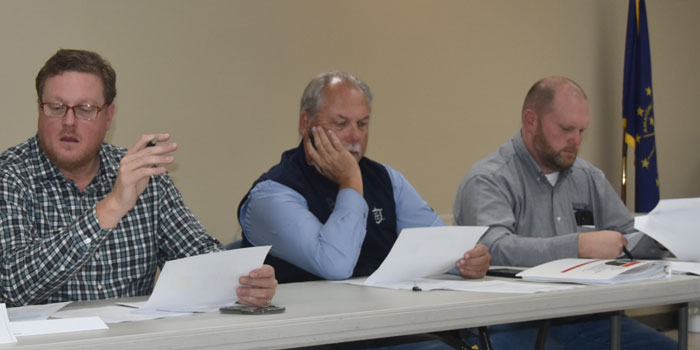 Board members Jon Tyler, left, Chuck Simpson and Brian Davison look over documents regarding the financial report. As the project nears the construction stage and changes are being made, the board is already seeing a bit of monetary movement. Photo by Caleigh Byrer.

NORTH WEBSTER — As contractors have been hired for the project and are now in the final stages of the planning process, the Tippecanoe-Chapman Sewer District board at its Monday, Nov. 14, meeting discussed setting a date for the groundbreaking ceremony.

Henschen stated they have narrowed the groundbreaking ceremony down to mid-afternoon Dec. 8, but that is still subject to change. JPR will be sending out more details once they are solidified.

As for project B, the West Tippecanoe area, the plan is to begin at the pump station 2 site and continue up to Armstrong Road. Crews have mobilized and are beginning to dig in the pump station 2 entry drive to move it back and create parking space.

Project C, the East Tippecanoe area, is not expected to commence until January 2024.

Kim Hathaway and Jennifer Ransbottom discussed the importance of keeping good financial records now that the process has begun. Hathaway plans to sit in on a meeting with Baker Tilly to ensure he is aware of their financial standings.

Each month Baker Tilly will be providing information to the board regarding their funding balances.

The post-bid connection request was approved by the board. The request is intended to give the remaining 5% of community members — fewer than 200 people — who have not signed easements the opportunity to become part of the project.

The process is fairly simple. The request would be run past the contractor on the project, an informal proposal would be given to the individual seeking inclusion and if they wish to continue, they would just have to sign a short agreement and provide a check.

Variance requests will be sent out soon for individuals who may be exceeding policy guidelines. Now that contractors have been selected, they are able to provide a calculated cost for these individuals.

They will be given until Dec. 31 to pay, but if they do not, the subject will be moved back within policy guidelines. “If they ask for a buried structure but don’t pay, they aren’t going to get a buried structure,” Henschen stated.

The project was approved with all these variances, so the revenue received from those individuals offset construction costs. If they choose not to pay, the board would receive a deductive change order from the contractor.

If an individual is unhappy with where the stake is placed, Henschen stated they should call JPR rather than move the stake to where they would like it to be. “We need to be aware of every single grinder location and any proposed changes.”

Changes to grinder location will be addressed monthly or as needed.

Letters and coupon books from Gemini billing will be sent out in the next few days, with the first bill due on Dec. 20.