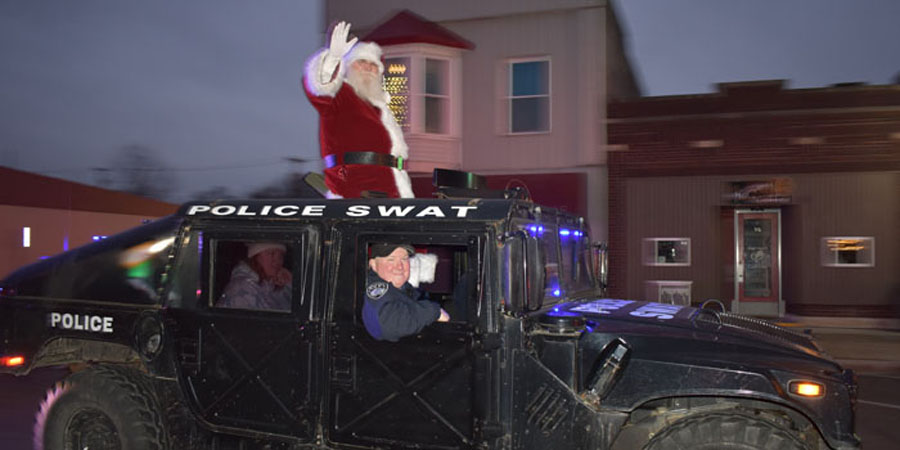 Milford Police Deputy Matthew Carter requested the use of town funds and facilities for the parade, which is tentatively planned to line up at the former PNC Bank parking lot at 5:30 p.m. before commencing at 6 p.m. with Santa Claus in the turret of the town’s Humvee.

Police, fire, EMS and town vehicles will also take part in the parade, which will then make its way from downtown east on Catherine Street to Shafer Street and North Park. From there it will move from east to west using streets running north and south.

Carter suggested residents gather at the northwest corners of the route to view the parade. He also emphasized only emergency responders will take part in the parade itself.

After the parade, there will be a meet-and-greet with Santa at the Milford Fire Department, 214 S. Main St. Hot cocoa and cookies will be available at no cost.

Ryan LaReau of Commonwealth Engineering was on hand to inform the council that, since the kickoff meeting with the town held Sept. 26, his team has met with Milford water and wastewater officials, Steven Marquart and Mark Brubaker, to obtain documents and discuss needed improvement projects.

They have also scanned in record documents, including town maps for each utility, and have started the first sections of the study, documenting background information and the town’s general utility information and condition for water, wastewater and storm sewers.

Upcoming tasks include a complete assembly of utility maps, something LaReau said was “lacking.” There will also be meetings of the yet unformed infrastructure committee in December. The final report must be completed and presented to the town by Feb. 19.

Clerk/Treasurer Tricia Gall announced the resignation of Charlotte Siegfried from the Board of Zoning Appeals and Milford Redevelopment Commission, effective in 2023. The council is now seeking her replacement, preferably for both positions, which are closely related. Anyone interested may contact Gall at Town Hall, (574) 658-4519.

During police reports, the council approved the purchase of seven new bulletproof vests at a total cost of $4,375 after receiving a grant from Patrick Leahy Bulletproof Vest Partnership.

The council also approved Town Marshal Derek Kreider’s request to apply for a grant to purchase a photo ID system for children as part of the department’s efforts to “increase public outreach.” The $5,521 software can assist in recovering missing children, providing an ID with the child’s information, including a thumbprint. Kreider hopes to use the kit at future Milford Fests and Third Friday events. He added the software can also be used for town employees.

Marquart informed the county surveyor of the need to remove downed trees in Felkner Creek near Old SR 15 and Turkey Creek Drive that have led to flooding endangering homes on the north bank.

Leaf pickup will end Friday, Nov. 18, after which all leaves must be bagged.

The emergency replacement of a pipe at 321 E. Fourth St. by Kline Excavating at a cost of $1,650 was approved, as was $1,220 for the repair and maintenance of 13 overhead doors in town buildings.

The council approved Marquart’s request to apply for the first round of Community Crossing grants before Jan. 1.

Council members chose to table a decision on including North Park in the asset management road inventory until it is determined they meet town standards.

Also tabled was a decision to install a new 6-inch pipe at Milford Fire Station at a cost of $23,600.

The council heard from Milford resident Joe Graf, who plans to remodel a house at 308 N. Henry St., turning the single-family home into a multi-family duplex; however, it was determined the council could not provide Graf with an acceptance letter to the Board of Zoning Appeals until he provides more information.

Gall reported the clerks’ offices will be closed Thursday and Friday, Nov. 24-25, for Thanksgiving.

The annual terminal service agreement was approved at a cost of $525.

Employee review meetings will be held at 5 p.m. Tuesday, Nov. 29.

The town employees’ Christmas party will be at Harry’s Tap and Grill on Friday, Dec. 2.