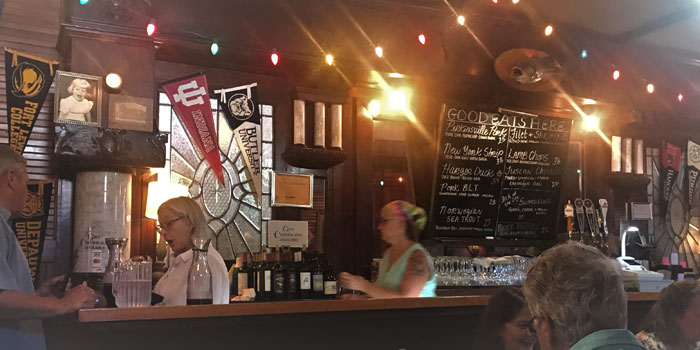 Nostalgic decor is everywhere including the original bar and chalk board menu at Binges Tavern. Photos by Loren Shaum.

Ever hear of Perkinsville?

Few have but this little village in the middle of nowhere goes back to 1821 when the first recorded white settler pitched a tent adjacent the White River.

Then, in 1825, William Parkins arrived and built a cabin. In 1837, Perkinsville was platted. The filing was supposed to be Parkinsville. 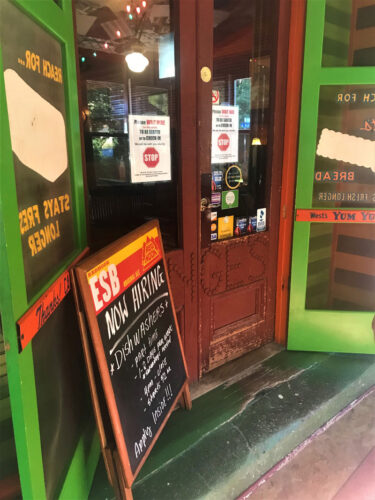 Later, the A. J. Applegate General Store opened and sold everything that any settler would need!

In 1934, Chuck Bonge bought the original store and opened a tavern. After closing the tavern, it set empty until local restauranters, Tony Huelster and Don Kroger, discovered the property in the early 1990’s.

They had a vision to restore Bonge’s Tavern to a destination restaurant, and after extensive restoration, the vison became a reality when they opened in 1997. A legend was born and soon thereafter, Tony and his wife became sole-owners.

Initially, the tavern took no reservations, but as the reputation grew, people came hours before the evening opening to tailgate in the parking lot while hoping to capture a table. The tavern installed a port-a-pot and encouraged patrons to bring tailgating goodies.

As the legend grew, tailgating turned chaotic, so, the tavern had to change to reservations-only. Still folks arrive early and sit in the beer garden until their table is called.

As you turn off SR 13, you meander along the White River to the tavern. What immediately catches your attention is that it’s a throw-back. The restoration retained the original tavern décor including nostalgic signs of the time everywhere.

When your name is called, the door is unlocked, and you walk into a time capsule! Old pennants adorn the walls and funky light strings dangle across the ceiling. The wood floor, bar and bar back-drop are original. There is no seating at the bar, but there are five booths and six tables. With the party room behind the bar, the tavern’s capacity is 68.

You would never imagine that you are about to embark on a culinary journey! 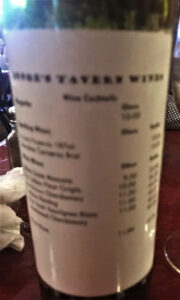 Bonges Tavern wine list is listed on a wine bottle at each table.

We settled into a booth with friends, and Dee, greeted us. First-up, what to drink? They only serve beer and wine, so we perused the wine choices. Our friend chose a Zinfandel from Wild Hog Vineyards, and it was a great choice!

The house-smoked salmon is a signature appetizer, so we started with that, and it was exceptional choice! Served with toast points, capers and a fiery, house-made horseradish that clears your sinuses, it was quickly devoured!

For entrees, the first item on the chalkboard is “Perkinsville Pork,” which is the tavern’s most popular dish. Others entrees listed included sirloin steak, filet mignon, Harger duck, pork BLT, lamb chops, Norwegian sea trout, Tuscan chicken, their signature barbecue brisket (smoked in house), and a fish of the day. On this day, the fish was swordfish.

On weekends, prime rib is featured, and we’ll go back to sample that.

I immediately leaned towards the Norwegian sea trout, which is something I’ve not seen on any menu, but the wine choice made me lean towards the New Zealand lamb chops. The serving is three double chops — seared medium rare. Served with Israeli couscous and a grainy Dijon mustard cream sauce, it was an interesting dish! New Zealand lamb tends to be older than locally grown lamb, so it is a bit tougher. So, be aware! None the less, I hammered it! 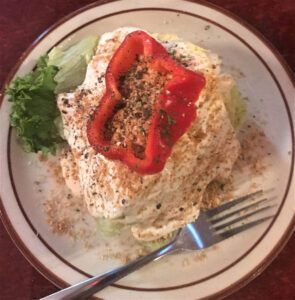 Bonges Tavern’s wedge salad is as good as found in any steak house.

Each entrée comes with your choice of a wedge salad or their signature soup — tomato bisque. I chose the salad but tasted the bisque. Both were as good as had anywhere!

One of our friends that recommended this place ordered the Tuscan chicken. It was served with spaghetti, capers, roasted red pepper, Meyer lemon and a tarragon aioli. All were quite satisfied, but we decided to share a dessert.

The signature dessert is the sugar cream cake. The serving is huge and enough to share with four. That too was slammed!

Bonge’s Tavern is one of the best obscure locations we have ever visited. They definitely have a cult following, and people come from afar to experience the tavern’s culinary treats that far exceeds high-end Indianapolis restaurants. It’s only a two-hour drive from Lake Country down SR 13. This time of the year there is a majestic color display all the way there. You won’t be disappointed!

Patrons waiting for their table to be called picnic or tailgate in the parking lot. 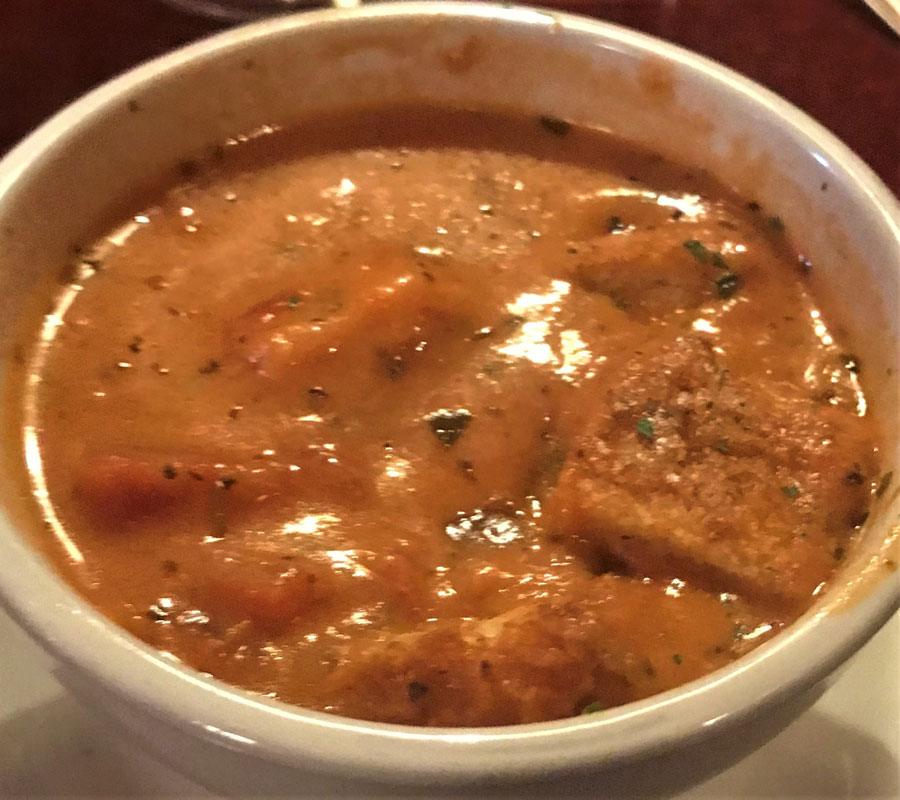 The tomato soup is an excellent way to start. 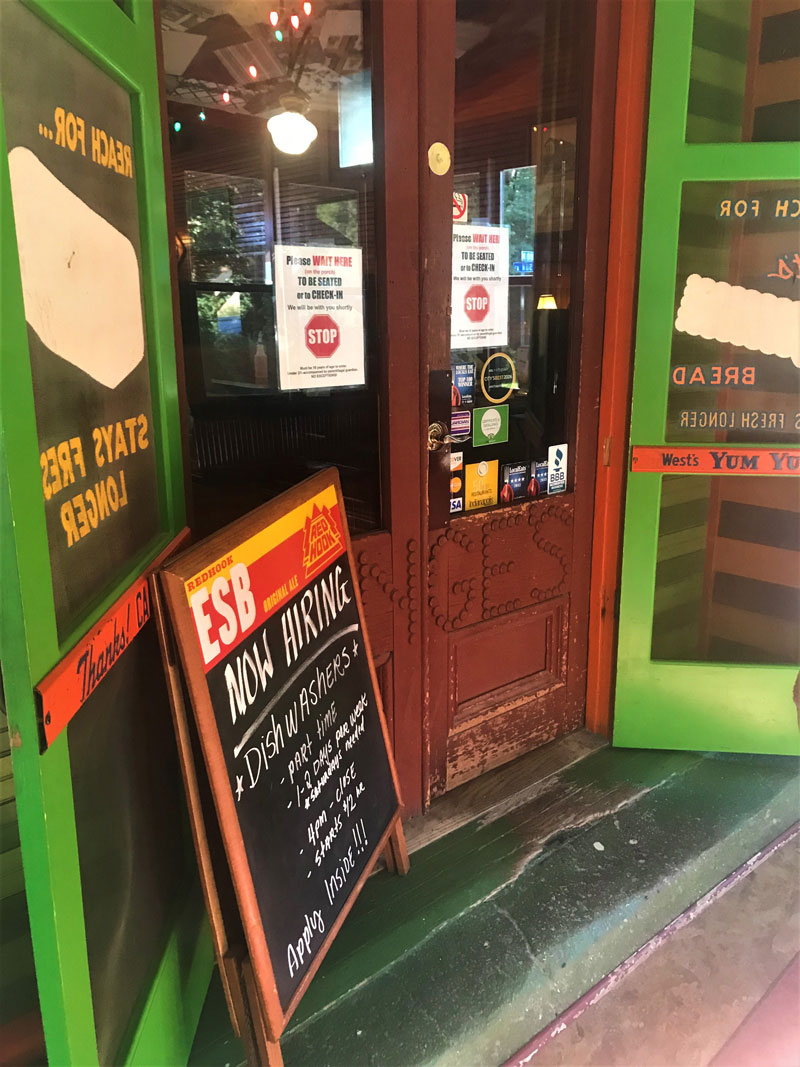 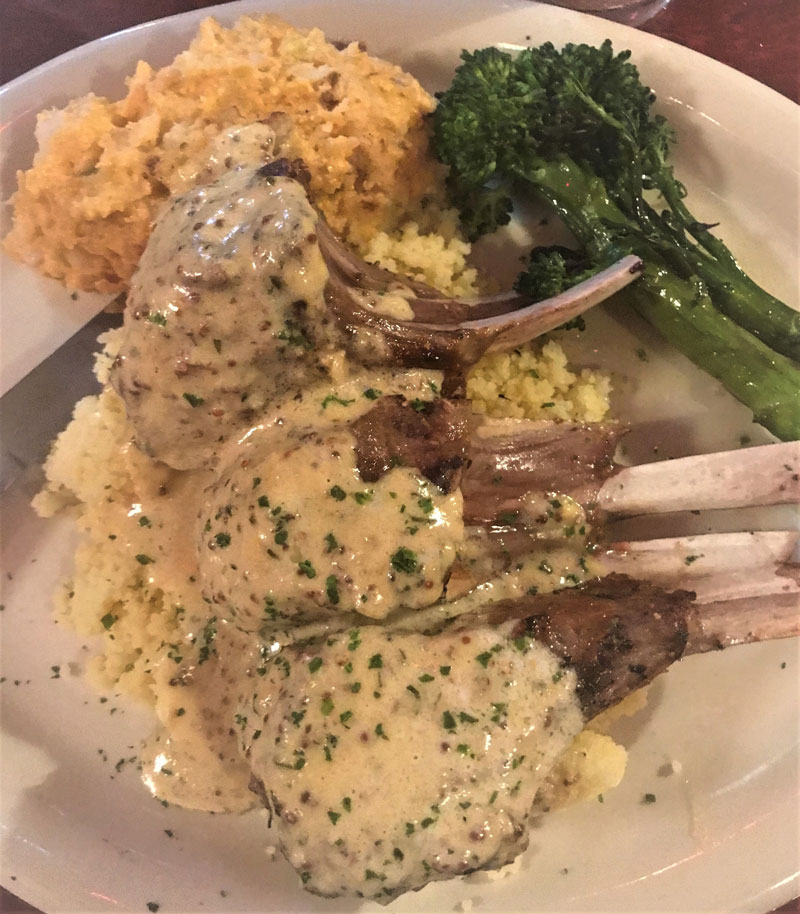 The New Zealand lamb chops are a superior entree. 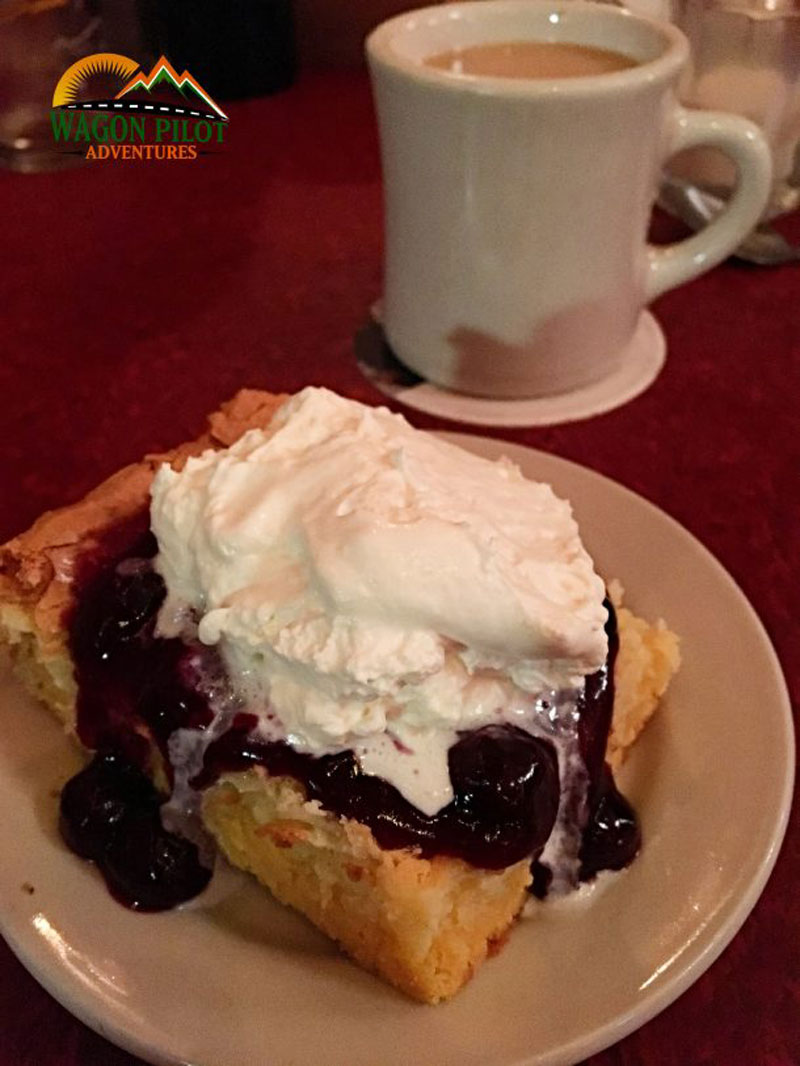 The sugar cream cake is the signature dessert. 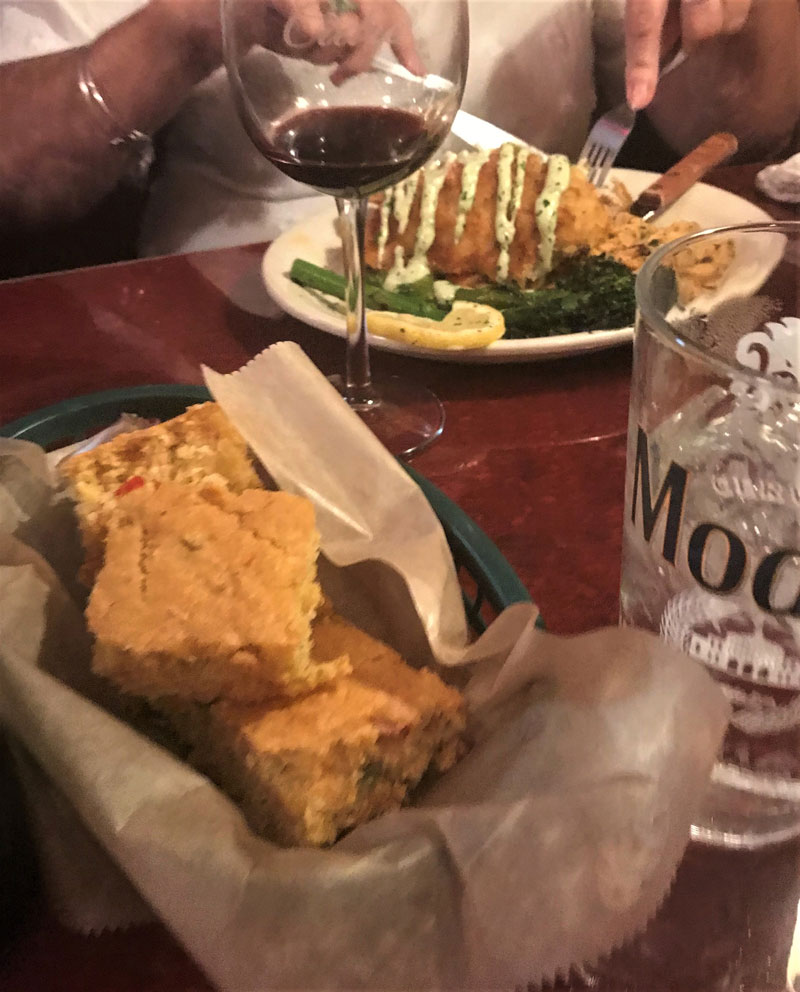 Warm jalapeno corn bread is a real treat and the Tiscan chicken dish is one of the more popular entrees. 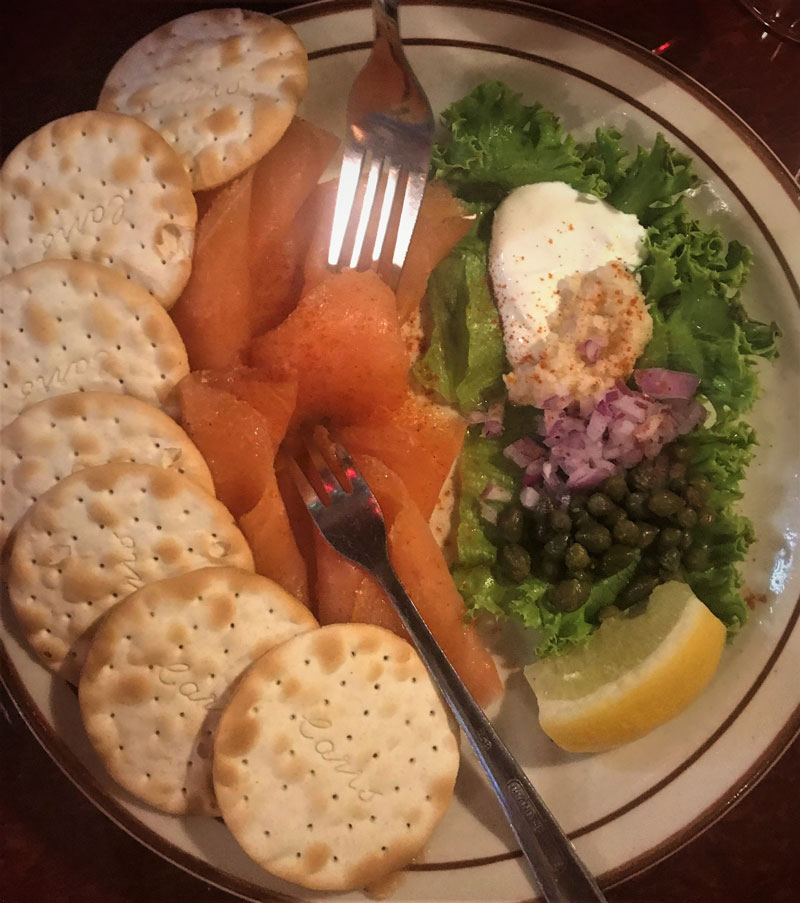