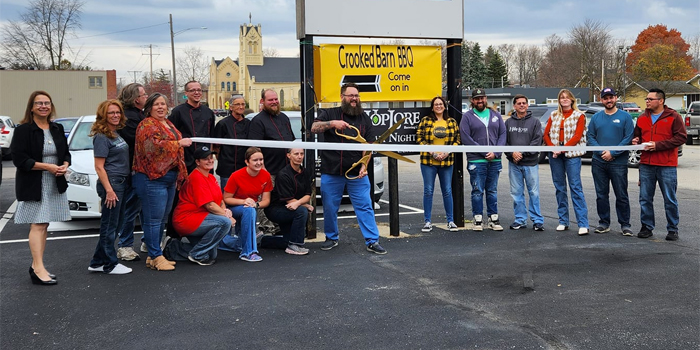 WARSAW – A food truck that opened just six months ago is now the sole provider of food at HopLore Brewing Co., in Warsaw.

Crooked Barn BBQ celebrated its opening in May and Scott Smith, who co-owns Crooked Barn with his husband, Shawn Smith, said he had no intentions of the food truck business taking another turn.

But after a few months of selling food in the front parking lot HopLore Brewing, 307 W. Market St., the two businesses realized how well their approach seemed to meld. Turns out, the two businesses paired up as well as the beer and barbeque they sell.

“We played off each other quite well,” Scott Smith said. “We have a lot of the same valued ideas on how the customer should be treated and the product we should give them.”

HopLore opened in Warsaw more than a year ago after its original operation in Leesburg opened in 2017.

The new partnership was celebrated Friday with a ribbon cutting hosted by the Kosciusko Chamber of Commerce.

With the partnership, Smith began putting his spin on previous lunch items and now offers pulled pork barbecue flat bead pizza and barbecue pulled pork taco on Tuesdays, among others.

HopLore owner Stefan King said the change will allow them to focus more on brewing beer.

“Even though we have a restaurant spot in Leesburg, we’re always ‘brewery-first,’ ” King explained. “The more locations we have, the harder it is for us to maintain brewery-first,” King said.

“Having a quality food partner that can take care of that aspect of the business is very important to the quality of beer and the quantity of beer we put out to the masses,” King said.

The merger of sorts, they say, means downtown Warsaw has a new lunch destination.