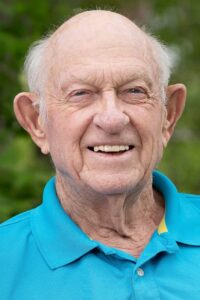 He and his family moved to Winona Lake in 1938, where he attended Warsaw Schools. As a junior, he participated in the original (but short-lived) varsity high school tennis team, which achieved an undefeated season before being canceled. His senior year of high school was spent in Longview, Tex., where his father established the printing program at LeTourneau Technical Institute. He graduated from Taylor University in Upland and later received a Master’s degree from the University of North Carolina in Chapel Hill.

In the summer of 1952, he was drafted into the U.S. Army and served a two-year enlistment at the Army Chemical Center in Edgewood, Md. Following his discharge, he began his career as an educator, serving as a math teacher and high school principal in Ohio at Forrest and Mount Blanchard. He also coached basketball, cross country, and track. Accepting a graduate fellowship from the National Science Foundation led Joe and Lois to the University of North Carolina in 1958, where he earned his Master’s degree. Returning to Ohio, he was the principal at Harrod for one year.

In 1960, Joe, Lois and their young family moved back to Indiana, where Joe accepted a position teaching math with Warsaw High School. Two years later he became the Vice Principal and Athletic Director, while still serving as the Chairman of the Math Department and teaching one math class. One of the first things he did as Athletic Director was to re-establish a boys’ tennis team, which he coached.

Throughout the 1960s, he was actively involved in the community. He was appointed to the Kosciusko Community YMCA Board of Directors and was made Activities Director. He also served on the Winona Lake Town Board, including one year as its President. Under his leadership, the land for the Winona Lake Park was acquired by the town.

In 1970, he accepted a position teaching math at Goshen High School and was promoted a year later to Vice Principal and Athletic Director, positions he held until 1975.

In the fall of 1975, he and his business partner, Ray Monteith, broke ground for the Warsaw Racquet Club, which opened in April 1976. Joe and Lois eventually became the sole owners of the club, which he operated for 23 years. The friendships and community connections established through the Club were a life-long treasure to him.

From 1984 to 1990, he served as the Director of Ivy Tech in Warsaw. He greatly enjoyed connecting adults to education and was instrumental in expanding local programs to serve our community.

He was an avid tennis player and coach. Through the years he coached numerous boys and girls tennis teams and instilled his love of the game in countless players in this community. He saw tennis as the perfect game to develop not only physical strength, but also strength of character. He said, “In tennis, players are honor bound to make the correct call even if it causes you to lose the match.”

Over the years, Joe and Lois traveled extensively around the country for national tennis tournaments. He won four USTA Category 1 National Championships. In addition to his four Gold Balls, he also won four Silver and seven Bronze Balls.

He maintained a high USTA ranking in both singles and doubles in his age bracket in the Midwest Region for many years. In 2011, he was nationally ranked number one in doubles and number three as a singles player. That year, although unable to attend, he was honored to be selected to play on the USA World Cup Team in Turkey.

He had the opportunity to compete against three former Wimbledon champions: Bobby Riggs, Vic Seixas and Poncho Gonzales. He was also very proud to have represented the United States multiple times in the Gordon Trophy, an annual tennis competition between the U.S. and Canada. He continued to play tennis into his 90’s.

He was a member of the Winona Lake Free Methodist Church for over 80 years.

Friends and family may come and visit from 4-6 p.m. on Monday, Nov. 7, at Winona Lake Community Church, 902 College Ave., Winona Lake. There will also be an hour of visitation prior to the service at the church from 10-11 a.m. Tuesday, Nov. 8.

Joe’s life will be celebrated with a service at 11 a.m. on Tuesday, Nov. 8, at Winona Lake Community Church, 902 College Ave., Winona Lake, and officiated by Pastor Doug Lemon. A graveside service will follow at Oakwood Cemetery, Warsaw.