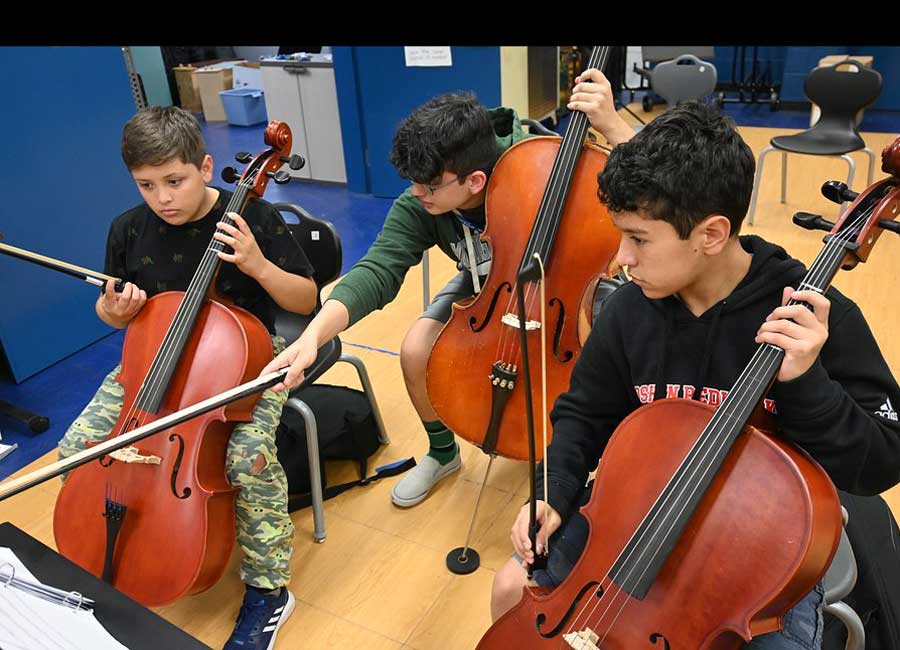 Intern Joseph Davis, a senior at Concord High School, center, works with members of the ECoSistema orchestra at the Boys & Girls Club in Goshen.

GOSHEN  — High school students are the newest mentors for ECoSistema orchestra students at the Goshen Clubhouse. The program offers music lessons to members of the Boys & Girls Clubs of Elkhart County.

“It started because we wanted to draw high school musicians to the club, while at the same time expanding our ECoSistema music programming as our current students age up into high school,” said Hillary Harder, program director for ECoSistema and Community School of the Arts at Goshen College.

Harder approached the Boys & Girls Clubs about recruiting teens through its Youth Honors Orchestra, which is open to area middle and high school students.

“We wanted to provide leadership opportunities for them. It’s a way to use their knowledge and give back to the younger students. It helps them understand that music can be a career option,” she said.

The teen interns are now members of the Goshen Club and are paid a stipend to work with the younger students. Seven teens are taking part in the program. They were recruited from the YHO because the program at the Goshen Club is still growing.

“It hasn’t been around long enough to have kids who have grown up through the program. Next year, we should have our first students who will be old enough to take part as interns,” Harder said.

The goal is to provide younger students with mentors, but the teens are getting lessons as well.

“I wanted the chance to teach others music. I really enjoy it and want others to enjoy it as much as I do,” said Joseph Davis, a senior at Concord High School. “I’m enjoying watching the kids improve their musical skills just in the time I’ve been doing this.”

“It’s been a really good time connecting with the younger students,” said Dane Wilson, a senior at Concord High School. “One of the main things is when we get new pieces to be able to play alongside them. I’ve been in their shoes and know that new pieces can be intimidating. Working with them, they see they can do it.”

Harder said having the older influence is making a difference.

“They benefit from the one-on-one attention. They look up to the older kids. They are there to help them with the notes and give them support. The younger kids love having the big kids playing with them and helping them develop their skills,” she said.

“We also want to give them opportunities to give back. They’re learning job skills, which is an important part of what we do at Club, but it really helps the teens become better citizens,” he said.

Intern Theresa Fussner said making connections with the younger kids is helping her explore whether teaching might be in her future.

“I think getting to know them is so special. It reminds me of when I was younger. I would have loved having something like this,” she said.

Harder said in addition to the mentoring sessions, the teens are getting weekly musical leadership training.

“We talk through strategies and how to coach students through tough pieces. I’ve been impressed how they’re willing to jump in and learn as they go. They’re getting job skills in the process.”

Mireles said he’s happy the program is making an impact. He said it’s a reflection of the other great programs at the Club.

“The teens want to have that sense of belonging, but they also want opportunities to give back,” he said.

“I’m grateful for the Boys & Girls Club for making this possible. We don’t have the capacity to do this on our own. We’ve been dreaming about ways to keep the students involved as they get older.”