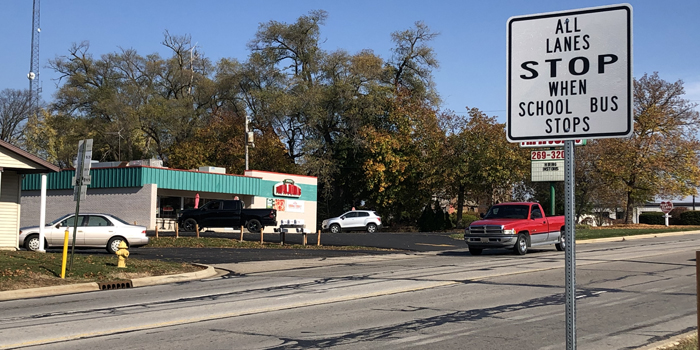 A sign telling eastbound drivers on East Center Street that “All lanes stop when school bus stops” hasn’t been extremely effective in getting eastbound traffic to stop when a westbound Warsaw Community Schools bus stops in front of Papa John’s. The school children live in an apartment complex behind Papa John’s. Photo by David Slone, Times-Union.

WARSAW — If there’s a way to get eastbound traffic on East Center Street to stop when a westbound school bus stops to let students off in front of Papa John’s, the city of Warsaw and Warsaw Community Schools hopes to find it.

On a two-lane or multi-lane road, vehicles traveling in both directions must stop. But when a westbound WCS bus stops in front of Papa John’s to let the students who live in the apartment complex behind the restaurant off, eastbound drivers aren’t always stopping.

The Warsaw Traffic Safety Commission discussed the bus stop at length during its October meeting and Warsaw Street Superintendent Dustin Dillon had a sign put up a week later for eastbound drivers stating “All lanes stop when school bus stops.” The sign was part of a request from WCS Director of Transportation Mark Fick, who had also requested the city put up a surveillance camera to catch violators.

On Wednesday, Nov. 2, Fick returned to the commission to update them on the bus stop. First, he provided the commission with a list of statistics on what WCS does.

“We transport roughly between 5,100 and 5,300 students a day; 80% of our stops are curbside. So we’ve adjusted since I’ve taken over from streetside to curbside, and the rest are just little spots throughout Warsaw and Kosciusko County,” Fick said.

Since the start of the school year, he said they’ve had 110 stop-arm violations in Kosciusko County, of which 43 were turned in to the county prosecuting attorney for fines. Those 43 were drivers and their vehicles that could be identified by a license plate number and description of vehicle.

Since the “All lanes stop” sign went up Oct. 11, Fick said, there’s been 16 stop-arm violations, but WCS has only been in school for 12 days because of fall break and a day was cancelled due to fog.

Fick provided some quick video clips of the stop itself when he was there recording vehicles and from footage from the school bus. In one video, the stop-arm on the school bus is out, but the eastbound vehicles don’t stop.

“The problem that we have is that if I’m not out there like I said before, we can’t identify the plate number. That’s why we put the sign out there, to hopefully start taking care of traffic that is going by,” Fick said.

Traffic Administrator Lance Grubbs said education in local media and putting a “All lanes stop” sign up doesn’t look like it helped.

WCS Assistant Superintendent of Elementary Education David Robertson said they met with Prosecuting Attorney Dan Hampton 1-1/2 weeks ago and the Papa John’s bus stop is a unique school bus stop. He said it’s definitely an “education piece” because people don’t understand that the state code says all lanes of traffic have to stop when a school bus stops. Robertson said they told Hampton they could send him five or six violations a day if he wanted them to.

“The reason we don’t pull back behind Papa John’s is we have more of an unsafe situation with the bus turnaround there,” Robertson said, noting it’s “really tight” back there.

Fick said there’s a child that comes out of every apartment behind Papa John’s. He said he and Grubbs talked about it and they need to come up with a better solution for the bus stop.

“I don’t know if the next big step would be to put lights out there on the sign itself and see where that takes us, where we can get them on timers, or we just start moving toward a camera,” Fick said.

He said if he’s not out there and the police aren’t out there, then drivers are just blowing by the stop. He also said he would have to dig into what the costs would be to light the sign.

Common Council President Jack Wilhite asked how many years the bus stop has been at that location. Robertson said there’s been years where no students lived in the apartments behind Papa John’s, but right now there’s more than they’ve ever had before living there. Fick said they have seven students they pick up and drop off, including two who live in the house behind the insurance company.

Warsaw Community and Economic Development Director Jeremy Skinner said the obvious objective was to stop the eastbound vehicles, but he didn’t know if a camera would do that. His suggestion to the Traffic Commission was to let the city’s planning and street departments do some research on what’s been done in other places for similar situations, whether that was flashing lights or other options.

He said he thought a camera was the last resort because it doesn’t actually stop anyone from going past the bus.

Wilhite said he was in favor of the planning and street departments doing more research on the matter. Dillon said he would reach out to the Indiana Street Commissioners Association and see if any other communities ran into a similar issue and came up with a solution that was effective.

The Commission eventually approved to table the topic but leave it on their agenda until some research was done.

Dillon told Fick they may add some warning signs and other stuff after they do some research. He said he would reach out to Fick directly and they could see if it helps out at all.