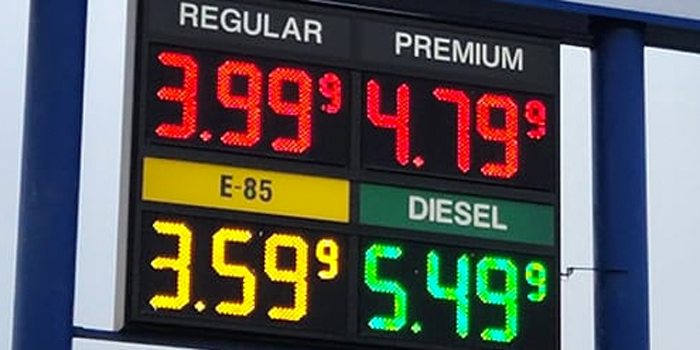 Prices for regular gas jumped back up to nearly $4 a gallon overnight in Warsaw on Tuesday, Nov. 1. InkFreeNews photo by Dan Spalding.

INDIANAPOLIS – A monthly gas sales tax will rise beginning Tuesday, Nov. 1, in Indiana, after a brief autumnal reprieve, to 23.1 cents per gallon.

That’s up a cent from last month and up more than 5 cents from November last year.

The sales tax is recalculated each month based on gas prices. Gas cost $3.29 a gallon on average in Indiana from September 16 to October 15, according to the Indiana Department of Revenue, up from $3.14 in the month prior. Multiply that by the 7% sales tax rate, and that’s a tax of 23.1 cents on each gallon bought.

Still, it represents a decrease from a peak sales tax rate in August of 29.4 cents per gallon.

But that could go up in the next tracking period.

At $3.82 a gallon on Monday, Indiana’s gas prices were slightly above the national average of $3.76. The highest prices are generally concentrated in the northwestern and western regions of the state, with gas prices hitting $4.13 in White County, according to AAA.

Gas prices remain a flashpoint in the current campaign season.

Indiana is one of only about 10 states that apply the state sales tax to gasoline purchases, which pushes up the price Hoosiers pay at the pump.

U.S. Sen. Todd Young faced a social media pile-on last week after tweeting a gas price-bashing picture (featuring a $3.99 price in Gary) that didn’t include a car. Young has blamed President Joe Biden for inflation – and said the car was out of frame.

Biden’s administration, meanwhile, says it’s doing everything it can to lower prices, including releasing oil from the country’s Strategic Petroleum Reserve through December and maintain pressure on oil and gas companies to make prices at the pump reflect lower wholesale prices.