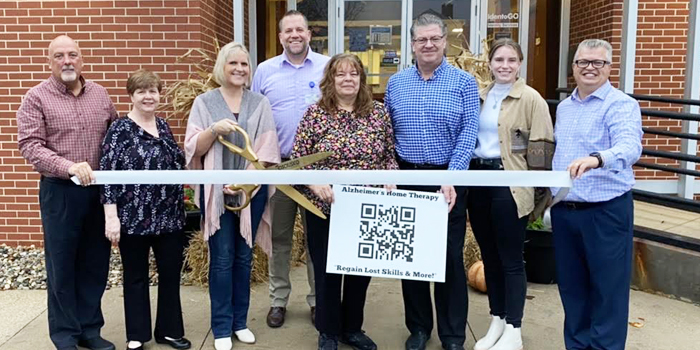 WARSAW — Wende Roberts knows what it’s like to have family members deal with memory-related issues.

“My dad had a 22-year journey with Parkinson’s. He was diagnosed when I was in fifth grade, the youngest in the Midwest at the time, so I was in a caregiver role very early in my life,” she said. “Then my mother ended up with a five-year journey with Alzheimer’s. She just recently passed this past January.”

Those experiences helped lead Roberts, of North Webster, to becoming a local licensee with Alzheimer’s Home Therapy. The Kosciusko Chamber of Commerce had a ribbon-cutting for the business on Monday, Oct. 31.

Roberts got involved with Alzheimer’s Home Therapy, a national program, earlier this year after her mother’s death.

“I was home, couldn’t sleep, I saw this (program) on Facebook,” she said. “I called the guy … It just hit. I’m a schoolteacher … What I liked about (the program) when he explained it, it basically was like tutoring for those with dementia.”

Roberts noted she has had much experience with tutoring, being tutored herself and offering it to others.

“From a Christian standpoint, God has wired us all differently and so finding out how we’re wired and connecting that with kids. It’s amazing what happens. It’s the same principles here, so that’s what I loved about it,” she said regarding the program.

Through Alzheimer’s Home Therapy, Roberts will work to do an assessment first for potential clients either in their homes or facilities that she has been OK’d to enter. They can also be brought to Roberts.

“It’s basically getting to know the family because the family is such a support, or whomever is assisting them if you will,” she said.

After that, Roberts will do brain games and sensory therapy with the clients. Appointments last about an hour.

They include “having goals that are attainable for (the clients) and adjusting as necessary depending on their conditions,” said Roberts.

Though Alzheimer’s is in the name of the business, the therapy is meant for anyone struggling with dementia or memory-related illness, said Roberts. She can serve clients in seven counties: Kosciusko, Elkhart, Marshall, Fulton, Whitley, Noble and Huntington.

Roberts said she wants to reflect “hope and encouragement” from her Christian faith in her service to clients.