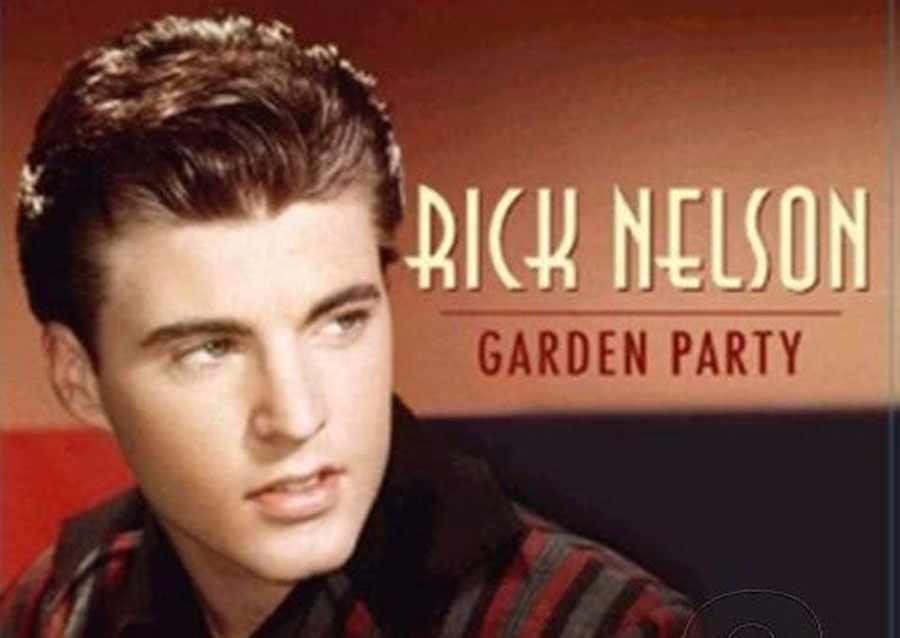 Editor’s Note: Randal C. Hill, Brandon, Ore., is a retired English teacher with a master’s degree. While attending college in Long Beach, Calif., he worked as a DJ at two radio stations. Later, he taught language arts at Fairvalley High School in Covina, Calif., where he offered “The Rock and Roll Years,” an elective fine arts class that featured invited guest speakers: Jan and Dean Bobby Vee, Freddy Cannon, to name a few. He has extensive writing credits including the first three editions of the House of Collectibles’ The Official Price Gide to Collectible Rock Records, which was reviewed on NBC’s Today show. He has done numerous personality profiles of rock and pop artists for the record-collector magazine Goldmine.

“I went to a garden party

“To reminisce with my old friends

“And play my songs again.”

That’s what Rick Nelson expected when he signed on as a “special added attraction” at a New York oldies concert at Madison Square Garden on Oct. 15, 1971. But a tactical error by Martin led to his storming offstage, his set cut short by several tunes.

A year later, via “Garden Party,” his 19th — and final — Top 10 hit, he told the world his story behind that long-ago Friday night.

Chuck Berry was the show’s headliner, with supporting acts that included Bobby Rydell, Bo Diddley, the Shirelles, the Coasters and Gary U. S. Bonds. Each of the performers — Nelson included — had been hitless since 1964, the year that a Liverpool, England, quartet swept Americans off the charts overnight.

“When I got to the garden party

“They all knew my name

“No one recognized me

That evening, Nelson strolled onstage with ultra-long hair, bell-bottom jeans, a velvet shirt and cowboy boots. His long-time fans were aghast. Nelson would later recount to Rolling Stone, “They kept looking at me and my long hair as if they couldn’t believe I was the same person. But I couldn’t have done it any differently, except by getting my hair cut and putting braces on my teeth.”

He opened with “Be-Bop Baby,” one of his early hits, and for a while Nelson’s classics brought screams of recognition and appreciation. But later in his set he offered a cover version of Bob Dylan’s “She Belongs to Me,” and the mood of the audience instantly dampened. To make matters worse, Nelson set down his guitar, seated himself at an onstage piano and launched into the Rolling Stones’ “Honky Tonk Women.” What followed was a tsunami of boos.

Concert promoter Richard Nader later explained, “The people that were in Madison Square Garden were not there to hear contemporary music; they were there to escape it.”

“When I sang a song about a honky tonk

Nelson played one more number before exiting the stage to seek refuge in a dressing room that night.

He soon renewed performing as he had since his return to the concert stage in 1969, mixing his oldies with some newer material. Outside of the New York debacle, he never encountered any problems; on a 1972 UK tour, for example, Nelson played London’s legendary Royal Albert Hall. His song set was essentially the same as the one at the Garden, only with more newer offerings. The exuberant crowd that night demanded four encores.

Nelson would eventually create his story song about that disastrous 1971 night. In doing so, Nelson’s “Garden Party” served notice to the world that he would never again be part of any strictly “oldies” gig.

“If you gotta play at garden parties

“I wish you a lotta luck

“But if memories were all I sang

“I’d rather drive a truck.”