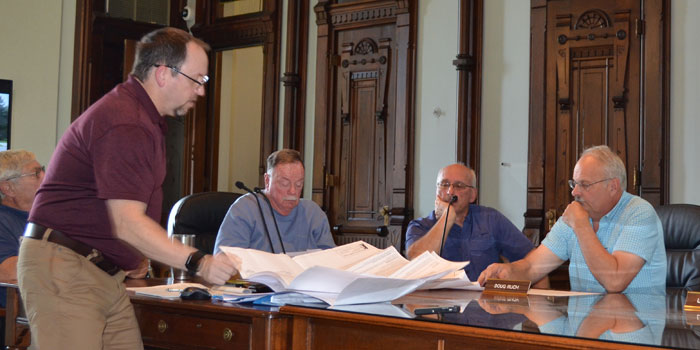 Two final plats, four preliminary plats and one rezoning petition were approved at the regular meeting of the Kosciusko County Area Plan Commission Wednesday, Oct. 5, at the county courthouse in Warsaw.

Kyle Coleman’s request to rezone 7.53 acres from an agricultural district to a residential district was approved. The property is located on the north side of McKenna Road, southeast of EMS B38 Lane in Tippecanoe Township. Coleman wants to build a maximum of 15 new homes on the property.

Coleman’s request did draw some concern from nearby residents. Joe Bryant, a nearby property owner, said there is a wildlife designated area nearby.

“We are just very concerned,” he said. “That’s too many homes and there’s a safety issue due to the road.”
Also, residents asked about water issues after heavy rainfalls.

“Our land gets a lot of water,” said Jody Wallace, adding she sometimes gets 8 inches of water in the driveway.

A retention pond would need to be built, per a county ordinance, said Matt Sandy, the new APC director.

A petition was submitted from neighboring residents who do not want the property rezoned.

Despite the opposition, the board voted 9-0 to rezone the property. County commissioners will hear the case at 9:15 a.m. Tuesday, Oct. 25.

The APC board approved Paula Walls’ petition for preliminary plat approval for an agricultural II subdivision on a tract of ground. The property is located on the north side of Old Road 30, south of US 30 in Etna Township.

Ernest Hochstetler’s petition for preliminary plat approval for an agricultural II subdivision on a 19.95-acre tract of ground was approved. The property is located on the east side of CR 750 West, 900 feet south of CR 1350 North near Nappanee in Jefferson Township. Hochstetler wants to build two single-family residential homes on each lot.

Also given the green light was Greg Stump’s petition. He requested preliminary plat approval for a two-lot residential subdivision on a 1.94-acre tract of ground. The property is located on the east side of County Road 650 East, south of Barbee Road in Tippecanoe Township. He wants to convert a pole building into duplexes and remove a mobile home.

“I want to put two duplexes on one lot,” Stump said.

Chet Wortinger’s petition for preliminary approval for a replat in a subdivision was given the go-ahead. The property is located on the south side of Old Shoe Lake Road, west of EMS B40 Lane in Tippecanoe Township.